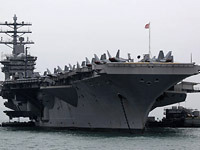 The United States is known to have the most powerful Navy in the world. This Navy once again reinforces the claim of Washington to the world domination. None of military operations, including Afghanistan, is conducted without American navy sailors and airmen.

For a long time after the formation of the independent U.S. Navy it was meant exclusively for the use off the coast of North America, until in the early 20th century the country decided to take on the role of the "world policeman". In 1907, Theodore Roosevelt sent 16 battleships in a 16-month circumnavigation cruise. Although the ships were painted white as a sign of peaceful intentions of the Americans, this cruise emphasized the U.S. desire to show the entire world that it had another large owner. After the Spanish-American and Russo-Japanese War, Roosevelt wanted to show the world that the U.S. was able to control the entire world's ocean.

The power of the U.S. Navy helped to define the geopolitics of the twentieth century: the "Great White Fleet" of America has challenged all other countries. After the Second World War, it further strengthened its position in Western Europe.

In the 1990s, after the collapse of the Soviet Union, the USA became the sole superpower on the planet. However, the American Democrats did not rest on the laurels for too long. Recently, Washington has been worried about Beijing increasingly more, as the latter's growing power makes the Americans think hard about the opposition to the new Chinese challenge under the increased competition in world commodity markets, including energy market.

Volatile oil prices pose a serious threat to the United States dependent on foreign supplies of oil. Permanent crisis in the Middle East and the protracted war in Libya intensify the U.S. fears and destabilize the raw materials market, particularly in the context of the ongoing crisis. There are no talks about the reduction of the Navy. Such reduction would in turn cause the reduction of the U.S. military power and the country's impact in key locations around the world.

In this regard, the U.S. government is trying to reduce its dependence on foreign supplies of energy resources. These are all areas of life, economy and even the Armed Forces, including Navy. However, the U.S. politicians have been unable to work out an effective energy strategy. A good example of this would be the failed vote on the development of standards for energy-saving lamps through the fault of the Republicans.

On the other hand, several American experts are convinced that by 2016 the "Great Green Fleet " will surf seas and oceans and would include nuclear vessels, hybrid electric vehicles and aircrafts flying on biofuel.

Rear Adm. Philip Hart Cullom, head of energy and environmental department, said that the fighting spirit became the spirit of energy. He added that there was a need to think in a Spartan way and maintain the mission to avoid becoming vulnerable.
Cullom and his colleagues understand that they do not have much choice and therefore are looking closer at the "green camp". The U.S. Defense Department spends more oil than any other private or public institution in the world. In 2010, for example, the department burnt 135 million barrels of oil. In terms of energy spending the fleet is second only to aviation.

Navy officers also know the price of the imported oil. To ensure uninterrupted "supply" of oil from the Middle East is one of the main objectives of the Fifth Fleet based in Bahrain.
Dependence on foreign oil imports is one of the most vulnerable areas of the American military machine, not only at sea but on land as well. Energy costs are rising. In the past, the military spent $20 billion on fuel and electricity, and the federal debt has affected even the sacred cow of the Pentagon budget. Energy efficiency is a question not so much of green fashion, but banal survival.
However, it is not just about money and the desire to reduce dependence on oil and other energy commodities. Introducing the new "green" technology, Americans once again are trying to prove that in terms of technical solutions they are still very strong, at least in regard to the Navy.

The military has one indisputable advantage: they do not have to worry about public opinion. Naval experts may come up with arbitrarily bold energy ideas that the civil cannot even dream of, but as the result the U.S. Navy apparently will not be chained to the docks because of lack of fuel.
However, the idea of ​​the supporters of "green fuels" looks more like a dream: by 2015, U.S. ships must reduce oil consumption by 50 percent. Of course, this only applies to the business park. By 2020, the Navy must learn to get at least 50 percent of energy from alternative sources, and 50 percent of the military vessels will have to try hard to zero out- that is to spend no more energy than they can produce. In other words, the sailors themselves have expressed doubts as to how efficient the vessels will be after the replacement of traditional fuels with alternative ones.

The report of Rand Corp., made earlier this year, says that the emphasis on biofuels would be a mistake, that it is impossible to abandon oil altogether at once. "We cannot run on ethanol, because it has insufficient energy density, "adds Cullen. "We need something that looks and feels like oil."
In pursuing its objectives, the Navy can kill two birds with one stone: first, to achieve its "green" goals and obtain additional financing for the initiative, and share their own methods with the rest of the country. While politicians are crossing swords in the climate wars, and oil and alternative energy sources are separated by different poles, the Navy leadership understands that the nonsensical trick akin to the Republicans' anti-energy one can be very expensive.

In addition, it is clear that there is nothing that could replace nuclear power plants used for the main classes of ships, even in the medium term. In any case, the "green way" will not be easy, but now the fleet is gradually improving the energy efficiency of its onshore facilities, largely due to the policy of mandatory provision of energy solutions for construction of such facilities. Nevertheless, so far only one percent of energy is used by the Navy comes from the renewable energy sources.
There are fears that biofuels and other alternatives will be competitive, particularly in view of serious concerns about environmental safety. The other day Western scholars issued a statement that the use of biofuels causes more environmental harm than usual use of oil.
Sergei Balmasov, Natalia Sinitsa