Sedelmayer: 'Russia will pay me' 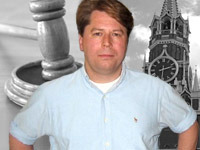 German entrepreneur Franz Sedelmayer is not going to stop in his intention to withdraw state property from the Russian Federation. On July 1st, the Supreme Court of Sweden recognized the legitimacy of the arrest of the building of the Russian trade mission in Stockholm. The building is to be sold at auction to compensate Sedelmayer's lawsuit.

Grigori Amnuel, the director of Open Dialogue International Club, told Pravda.Ru that it is sometimes better to keep silence than say anything.

"Judging upon the reaction from the Russian Foreign Affairs Ministry, it seems that the officials are not aware of the fact that in democratic countries the judicial authorities do not depend on executive authorities. In Sweden, they didn't take account of the fact that the case was not about Sweden alone. The Supreme Court of Sweden can not be a court of highest instance vs. the International Court of Arbitration, which upheld Sedelmayer's lawsuit in 1998. The decision from the Swedish court only means that they, unlike others, observe the rulings taken by international instances," he said.

What does Franz Sedelmayer think on the subject himself? Is he going to continue what he does? The entrepreneur previously said that his Swedish lawsuit was only a part of his claims against Russia. Mr. Franz Sedelmayer kindly answered these and other questions to Pravda.Ru

"Russia didn't want to pay earlier either. That's why I had to go on trial, in this case - in Sweden. The fact that Russia is unwilling to pay does not really matter. She is going to pay now. Russia is a debtor, and she will have to go on trial like it happened in Sweden."

"In other words, you are not completely satisfied with the decision from the International Court of Arbitration and from the Supreme Court of Sweden?"

"No, I am not, because the decisions can compensate the damage only partially. A standard set of measures will be taken against Russia; not only in Sweden, but in Germany too - in Cologne and in Berlin. The fate of the "Russian House of Science and Culture" will soon be determined by the Federal Constitutional Court of Germany. The process in Cologne will also continue. So, the litigation in Sweden is only one of the measures that I have taken."

"How will this case affect the image and attraction of Russia abroad, especially when Moscow wants to receive additional multi-billion investments?"

"Russia is making a very serious mistake as she puts her international image in jeopardy. Because of some two million euros, which kicked the whole thing off, the Russian authorities are putting pressure on the government of Sweden to demonstrate their power. They want to show this power to the Russian population and to many of those, who lost their property in Russia. As a matter of fact, Russia's reaction shows that the country is not safe for those claimants who try to retrieve what they lost as a result of corruption or illegal withdrawal of property.

"Investors and foreign entrepreneurs are carefully watching the process of how Russia wants or does not want to abide by its obligations. The information saying that Russia has never wanted to voluntarily compensate the suffered investors, even upon court order, will be spread very quickly. The majority of entrepreneurs - those who can't deal with speculations with foreigners in the first place - will stay away from the Russian investment market."

"On which grounds was the Swedish court ruling based?"

"First and foremost, Russia underestimates the fact that the legal system in Europe and in the whole Western world is mostly based on the fact that the property right for a person is sacred and that our courts are free and independent. It's no blackmail. Secondly, I think that the threats from the Kremlin pushed Sweden towards making the decision that has been made."

"What feelings do you have after this story?"

"The behavior that Russia has been showing in the story with me contradicts to the promises of the country's leaders. It's such a pity! Russians and the people like me, who love Russia sincerely, deserve much better, including better leaders."