Venezuela will keep sending oil to the United States 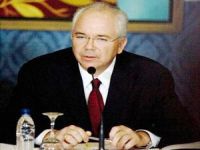 The Minister of Energy and Petroleum of Venezuela, Rafael Ramirez, said today that his country will continue to send the 1.2 million barrels daily sold to the United States after that country announced sanctions against the Venezuelan state oil company (PDVSA).

"We are serious and we will continue sending this quantity, but the question is: Are they going to do damage to us with their measures to be able to guarantee the shipment of oil? It's something that we are going to determine, the Venezuelans and not the Americans," Ramirez said in a televised speech.

The U.S. State Department announced sanctions against seven international companies, including PDVSA, that were determined to support Iran's energy sector, but Ramirez confirmed that this does not affect the 1.2 million barrels daily that Washington purchases from Venezuela.

Ramírez's words confirm the Venezuelan position expressed by Foreign Minister, Nicolas Maduro, who considered that the suspension of oil shipments is a measure for "extreme moments."

Washington decided to disqualify PDVSA from signing contracts with the U.S. administration and from receiving financing of that country in its import and export operations, which has not existed for five years.

The minister recalled that until the arrival of Chávez to the presidency in 1999, PDVSA and the entire country's oil industry was dependent on U.S. companies, which has gradually decreased due to the current national policy of diversification.

Were it not so, the penalty would have crippled the oil industry, he said.

"For any other country the effects would be very hard, however, long ago we left the dependence that the oil industry had on the U.S. and few people know about it," he said.

"The Americans do not like that we are sovereign, so we say to hell with what you want to imperialism," he added.

"Who is going to dictate the rules to us? The yankees (gringos), our executioners? No, they never will do it!" he insisted.

After repeating Venezuela's official condemnation of U.S. sanctions and to the "imperial desire to dictate laws to the whole world," Ramirez said that being a State company, PDVSA "must enjoy jurisdictional immunity."

"It cannot be subject to any type of sanctions from foreign powers," he supported.

Popular demonstrations by Chavez supporters were repeated in several Venezuelan cities since last Wednesday, and will culminate next Sunday with a "large concentration" in downtown Caracas. Ramirez confirmed the call that "all Venezuelans" participate.

"We are serious and we will continue sending this quantity, but the question is: Are they going to do damage with their measures to guarantee the shipment of oil? It's something that we determine, the Venezuelans and not the Americans," said Minister of Energy and Petroleum of Venezuela, Rafael Ramírez. EFE