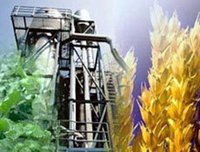 The growing production of bioethanol increases the shortage of food. Corn, sugar, other types of farm crops are required for the production of the biofuel. In addition, the growth of sowing for the green fuel reduces the square of lands designated for food cultures, which leads to smaller harvest and higher prices on food.

FAO's food prices index gained 2.2 percent in February, which marked the highest point since the analysis of the prices in 1990. The index embraces the fluctuations of prices on 55 sorts of food products.

A report from the World Bank confirmed that prices on food products continued to grow. WB's index of food prices increased by 15 percent from October 2010 to January 2011.

According to experts' estimates, the number of undernourished people in the world will exceed the level of one billion people already in near future. According to the UN, there were not more than 925 million of such people last year. The growing prices on food push people towards poverty and puts pressure on most vulnerable layers of the population - those who spend over 50 percent of their income on food. As a result, when prices increased by 15 percent from October to January, as many as 44 million more people found themselves below the poverty line, WB specialists said.

FAO's index dropped for the first time in eight months in March - by 2.9 percent. The growing prices on food and fuel push farmers and other agricultural productions towards growing most lucrative "fuel" cultures, which can only add more fuel to the fire.

Neither Europe, nor the USA intend to revise their standards which stipulate the constant increase of the share of natural fuel in their consumption. In the USA, the use of biofuel by 2022 is expected to reach 36 billion gallons a year (more than 160 billion liters). In the EU, ten percent of car fuel is to be produced from plants by 2020. China, India, Indonesia, Thailand and other countries already have their biofuel programs, The New York Times said.

China banned the growth of crops for the production of fuel ten years ago after the country faced a strong increase of prices on corn. The sudden growth of quotations on corn at Chicago Mercantile Exchange occurred due to the development of the bioethanol production in the USA. The latter uses up to 40 percent of its croppage for this purpose.

Nowadays, the Chinese produce ethanol from manioc root crop, which they also import from other countries. The prices on manioc started to grow, and the programs connected with the production of biological fuel in neighboring Asian states began to decline. Manioc is also used as cattle forage, which creates certain problems for the cattle breeding industry. Thus, the production of bioethanol from manioc results in more expensive food products for people.