Ukraine prepares to fight with Putin for gas again 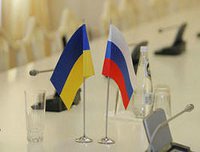 On April 12, Prime Minister Putin is going to visit Ukraine. The price on the Russian natural gas is going to be one of the most important questions, which Putin intends to discuss with the Ukrainian administration.

Ukraine is also in talks about the country's membership in the European Union, as well as in the Customs Union.

Valery Muntiyan, Ukraine's envoy for cooperation with Russia and Europe, said in an interview with Kommersant-Ukraine that the Ukrainian administration was planning to sign the agreement about the creation of the free trade zone with the CIS in May of this year.

"If there's an adequate decision from the Constitutional Court, we will be able to join the protocol about the establishment of the Customs Union," the official said.

However, officials from Ukraine's Foreign Ministry stated that Muntiyan's remarks were nothing but a provocation. "Being a member of the World Trade Organization, Ukraine can not join the Customs Union," officials from the ministry said.

It is worthy of note that the 16th round of negotiations about the establishment of the free trade zone between Ukraine and the European Union is taking place in Brussels on April 4-8.

"The free trade zone with the Commonwealth of Independent States is being created on the base of the norms and principles of the WTO. The European Union does not hold anything against this agreement, as you can understand," Muntiyan said.

Officials of the Ukrainian government previously said that the agreement with the EU could be signed already in 2011. However, Muntiyan now speaks about the free trade zone with Europe in 2015 and with APEC countries - in 2017.

In the interview, the official also mentioned an opportunity to increase the commodity circulation with trade partners in the CIS. The share of EU countries in Ukraine's foreign trade turnover makes up 29.6 percent, whereas the share of CIS countries - 40.2 percent.

Russian PM Putin said earlier that the members of the Customs Union will have to put up trade barriers on their borders. "The level of customs protection, which Ukraine received during its incorporation into the WTO is twice as low as our joint customs tariff," he said.

According to Muntiyan, Ukraine can join the Customs Union if Russia reduces the price on its natural gas for the country. In addition, the Union must compensate Ukraine's losses from the integration. Kiev will have to correct its tariffs and conduct negotiations with WTO members.

Prices on natural gas directly depend on fluctuations of world prices on oil. If oil prices increase to $120 per barrel, Ukraine will have to pay $400 to purchase gas.

"I don't know the interests which Putin was guided with. We must know them. We sent an inquiry to Ukraine's Office of the Prosecutor General so that they could send an inquiry to Russia's Prosecutor General. They screwed the partner, forgive my rudeness. Unfortunately, this is the word to describe what they did about the gas agreements, which Tymoshenko brought here, and she said that it was the best price," Inna Bogoslovskaya, a deputy of Ukraine's Party of Regions said.