Putin puts in his two cents about alcohol and tobacco 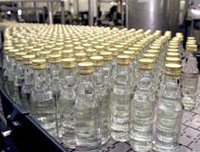 Prime Minister Vladimir Putin considers a sharp increase in excise taxes on alcohol unacceptable. The measure would not reduce alcoholism and trigger the growth of black market substitutes, as well as growth of moonshine production, says the prime minister. Earlier the idea of the revision of excise rates on alcohol and tobacco was proposed by the Ministry of Finance.

Russian President Dmitry Medvedev at a meeting of the Commission for modernization in Magnitogorsk instructed the government to prepare by June 1 a proposal for a possible mechanism for the reduction of compulsory insurance contributions starting January 1 of next year. According to the Prime Minister, lowering rates of insurance contributions to social funds would rob the budget of 400 to 800 billion rubles.

Ministry of Finance proposed to increase budget revenue in 2012-2014 to 1.9 trillion rubles by revising the planned excise taxes on alcohol, tobacco and mineral extraction tax on gas upward, as well as the abolition of certain privileges for depreciation and property taxes. Ministry of Economic Development has already announced its support of the Finance Ministry on tobacco and alcohol issues.

The financial department forecasts that by 2014 the increase in excise duties on alcohol will bring the budget 315.9 billion rubles of additional revenue. VAT revenues will also increase.

"A sharp increase will not reduce alcoholism, but will only lead to the use of surrogates and an increase in moonshine production," said Prime Minister Vladimir Putin.

According to head of the Center for the federal and regional markets for alcohol Vadim Drobiz, as a result of a sharp increase in excise duties in the Russian Federation 90% of legitimate vodka factories may shut down, and only 10% of production will remain in legal circulation in 2014.

"This means that the excise reform of Mr. Kudrin would make the bill that aims to regulate the legal market meaningless. After all, most of the alcohol market will go underground. And it will not be just illegal, but largely underground-surrogate-illegal market", the expert noted in the commentary to radio "Svoboda".

Thus, the opinions of several experts support the idea that a radical increase in excise taxes on tobacco and alcohol in an election year will not be allowed by the government. Their growth is large enough and will be felt on the wallets of the consumers of alcohol and tobacco.

President Dmitry Medvedev is also attentive to the alcohol market. In particular, he criticized the idea of classifying alcoholic beverages with the addition of ethanol as beer drinks.