Europe to ban import of electric power from Russia? 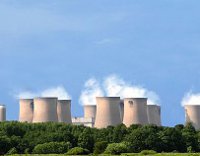 Jose Manuel Barroso, the President of the European Commission, offered to toughen control over nuclear electric power plants not only in the EU, but in other countries too. As for "other" countries, it goes about Russia and Ukraine, which also have their nuclear power plants. Noteworthy, Russia is going to build two more nuclear stations in the vicinity of EU borders.

Experts say that there are several ways to intensify control. It can be the expansion of IAEA's functions and the establishment of a parallel system of control over nuclear stations inside the EU. The European Commission intends to develop and offer its own methods to test security levels at nuclear power plants.

According to Barroso, the European Union respects the sovereign rights of its neighbors, but nuclear power does not stop at national borders, as the official put it. Such a statement brings up the idea that European officials are using ecological issues to disguise their economic interests.

"About 25 percent of the European market of uranium belongs to Russia now. Europe depends on Russia when it comes to nuclear issues. That is why the Europeans are trying to find a way to escape this dependence," Vladimir Chuprov of Greenpeace Russia told the Nezavisimaya Gazeta.

In the beginning of March, Russia and Belarus signed an agreement to build a nuclear power plant in Belarus. The project stipulates the construction of 2.4 megawatt nuclear station. The first and the second units of the station are to be launched in 2016 and in 2018 respectively. One of the units of the station will produce power for the export to the EU.

Another export-oriented station is to be built in Russia's Kaliningrad enclave. It goes about the Baltic nuclear power plant. This project stipulates the construction of two units, 1,150 megawatt each.

Russia's plans have already come across serious resistance in Poland and Lithuania. Lithuania has its own nuclear station project, but the authorities of this country continue to frighten the population with the station in Belarus. Poland is also going to launch two nuclear reactors by 2020.

The works to built the Belarusian and the Baltic nuclear stations have already begun. The Lithuanian and the Polish projects only exist on paper which means that these two countries are losing the nuclear race. If so, there is nothing left but to put pressure on competitors with the help of Brussels.

Prior to Barroso's statement, Lithuanian Prime Minister Andrius Kubilius warned potential investors of Rosatom's stations that they may encounter absolutely new rules regulating the sales of electric power produced both in the Baltic region and in the European Union on the whole.

The idea to ban the imports of power from the countries where nuclear stations do not meet security requirements looks like Europe's reaction to the disaster in Japan. If it is the European Union that acts as a nuclear security regulator, one shall assume that Europe is working on a tool of economic discrimination against Russia.