Real estate paradise can still be found in London 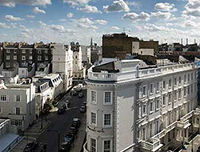 Foreigners are still interested in London's real estate. Citizens from 61 foreign countries purchased real estate in the British capital last year, a report from Knight Frank consulting company said. The presence of foreigners is especially noticeable in the sectors with prices starting from 2 million pounds sterling.

As of 2010, the fastest growth in real estate purchases was registered among citizens of Spain (by 340 percent) and Uzbekistan (320 percent). Citizens of Hong Kong (310 percent), the USA (225 percent) and Greece (175 percent) come next, RIA Novosti reports.

During the upcoming 12 months, the most active buyers of London real estate will be citizens of Russia, China, India, UAE, the middle East, Egypt, Italy, Libya, Turkey and Brazil.

The demand on British real estate among international customers was 10 percent lower in January of 2011 than it was a year ago. The prices in central London increased by 1.1 percent during the first month of the current year due to limited supply on the market.

According to PricewaterhouseCoopers LLP, last year London took the lead on investments in real estate with the total cost of the sold commercial real estate - $23.9 billion.

According to the forecast by Jones Lang LaSalle, in 2011 over 80 percent of investments on the British real estate market will be made in the capital of the kingdom. Asians (Indonesia, China, Thailand and Taiwan) will be most active investors at this point. At present moment, the largest group of investors in London has been formed by Chinese citizens.

Investments in British real estate during 2011 are expected to make up 52 billion pounds. Experts hope that investors will pay attention to less reliable real estate of lower status outside London.

Meanwhile, experts from the Institute for Public Policy Research said that there would be a shortage of residential real estate in England by 2025. According to their research, the number of buyers will be a lot more than the number of real estate objects for sale - by 750,000 units. The shortage will be especially noticeable in London, where demand for residential property will top supply by 320,000 units. Yorkshire and Humberside will take the second and the third place: the predicted shortage on the market will be evaluated at 151,000 units.

In general, experts optimistically predict the growth of demand on real estate in European cities in 2011. Real estate analysts from PricewaterhouseCoopers LLP said that Istanbul, London and Munich will be the most attractive European cities for purchasing real estate.