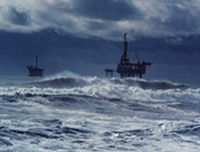 State-owned corporation Rosneft in the framework of the World Economic Forum (WEF) in Davos, Switzerland, signed an agreement with the U.S. ExxonMobil on joint development of the Black Sea shelf. Recently, Rosneft agreed to exchange shares and develop the Arctic shelf with BP, and last summer TNK Chevron was invited to the Black Sea depths.

"During the first phase of the project exploration of one of the largest deposits in the Black Sea shelf, Tuapse Trough, will be carried out, with a reserve of approximately 1 billion tons of standard fuel," said Deputy Prime Minister, Chairman of the Board of Directors of Rosneft, Igor Sechin.

The press service of Russian office of Exxon told Interfax that the shares of American company in the joint venture in the development of the Tuapse Trough will be 33.3%. Rosneft will have 66.7%, respectively. During the exploration phase financing will be provided by ExxonMobil.

"ExxonMobil will complement the existing advantages and experience of Rosneft in the region, bringing its technological leadership, high quality and latest technology to the project," said R. Tillerson. "We already have a successful experience of joint work with Rosneft in Sakhalin-1 project. We intend to expand these relations in order to meet the energy needs of Russia and the Black Sea region."

In addition, as noted in the report of the Russian company, under the agreement, Rosneft and ExxonMobil will explore possibilities of enhancing cooperation in the Black Sea energy sector. In particular, it will include projects in exploration and production, supply of raw materials to Rosneft's Tuapse Refinery and other markets in the Black Sea region, as well as the development of regional transport infrastructure.

In summer of 2010, Rosneft signed a similar agreement with another U.S. company, Chevron, to develop the West Black Sea licensed area. This is the so-called Val Shatsky located in the eastern Black Sea. Its area is 8.6 thousand square kilometers. The site has 10 identified potential structures, five of which appear the most promising. They encompass 80% of all the resources area of approximately 860 million tons of oil according to the international classification.

Currently, seismic works are conducted at the site, and drilling of the first exploration well is planned for late 2011 at Val Shatsky located near the Tuapse Trough. The companies created an operating company registered in the Russian Federation where Chevron has 33%.

Oil exploration in the Black Sea shelf is not subject to severance tax. The reserves of these two sites in total are estimated at approximately 5.3 billion barrels of oil.

Two weeks ago, BP and Rosneft, in the presence of Prime Minister Vladimir Putin, agreed to establish a global strategic alliance. Rosneft and BP will create a global strategic alliance by exchanging shares. Rosneft will receive a 5% stake in BP and will become the largest minority shareholder in the global oil giant. BP PLC would get a 9.53% stake in Rosneft, and will be the second after the Russian government shareholder with 10.8% of shares. The deal will amount to approximately $7.8 billion.

Joint exploration in the Russian Arctic shelf will be the basis for the partnership. Geological exploration alone in the near future will require at least $2 billion of spending. At the moment the joint venture is planning to spend approximately $1 billion.

An agreement between BP and Rosneft was also signed in Davos. The same day the AAR consortium, which represents the Russian partners in TNK-BP Holding, appealed to the High Court in London with a statement on the suspension of transactions under this agreement.