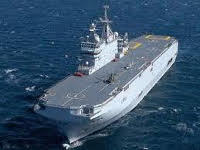 France and Russia have finalized the talks about the construction of Mistral helicopter carriers for Russia. The agreement between the two countries was signed on January 25 in France's Saint-Nazaire. Experts already said that France's readiness to deliver Mistrals to Russia was a political signal meaning that France perceives Russia as a partner.

The agreement was signed by French Defense Minister Allain Juppe and Russian Vice Prime Minister Igor Sechin, in the presence of French President Nicolas Sarkozy. The ceremony was held at STX enterprise, the maker of Mistrals.

It was earlier reported that Russia would subsequently be able to build more than two Mistral helicopter carriers at domestic shipyards. This is one of the visible benefits of the deal. After the construction of two Mistrals in France, Russia will obtain the technologies to build other vessels single-handedly. Both Russian and French officials describe the agreement as mutually beneficial.

Also read: Why does Russia need the French Mistral?

The tender was eventually won by France's DCNS. The company received the contract for the construction of two helicopter carriers.

A Mistral helicopter carrier costs approximately 400-500 million euros. The first vessel will be built at STX France shipyard in partnership with DCNS (France). France currently has two vessels of the type - Mistral and Tonnerre. In Russia, the vessels will be built on Kotlin Island in St. Petersburg.

Russia may begin the construction of Mistral-type vessels after 2014.

A Mistral class ship is capable of transporting and deploying 16 NH90 or Tigre helicopters, four landing barges, up to 70 vehicles including 13 Leclerc tanks, or a 40-strong Leclerc tank battalion, and 450 soldiers. The ships are equipped with a 69-bed hospital, and are capable of serving as part of a NATO Response Force, or with United Nations or European Union peace-keeping forces.