Moscow awaits investments for its future 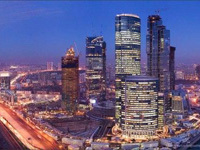 The Mayor of Moscow Sergei Sobyanin, speaking at the ceremonial reception for the leaders of diplomatic missions of foreign states accredited in Russia, said that the capital was interested in the soonest attraction of foreign direct investment in strategic areas that will shape the future of the city. First of all, he was talking about innovation environment.

In his speech, Sobyanin focused on the fact that "now the financial and banking sector plays a key role in Moscow's economy and, according to various estimates, the volume of financial transactions that take place in Moscow is on the 16th place among the largest cities in the world." "We have every chance to further develop this direction, transforming the capital of Russia into one of the international financial centers, which also requires significant investment," he stressed.

Nevertheless, Moscow expects financial investments beyond the banking sector. In his speech, the head of the capital said that Moscow needs to modernize not only the banking sector, but also hotels, communications and other necessary infrastructure. Sobyanin said that "Moscow is home to approximately 35% of all researchers and scientists of the country, both for academic and applied science, numerous universities that create powerful innovative potential of the city and we certainly will continue to develop this area, considering it one of the strategic one," Zerich.ru reports.

One of the goals of the Moscow government, according to Sobyanin, is the development of Moscow as a city that is to become comfortable for living. He called urban economy the main area that has huge potential for investment cooperation. "Our goal is to make Moscow the city that is really convenient for people, both Muscovites and guests of our city," said the mayor, naming transport issue in the capital region as the first one to solve.

Earlier, the mayor proposed to expand the investment sector in Moscow and move away from the exhausted fields of trade and real estate. At a recent conference Competition in Russia held in November, he said that "direct investment of a number of sectors saturated the market, and we cannot continue at the same pace." At the same time, he noted there were no other sectors for investments offered to investors in Moscow besides trade and real estate, and stated the need to attract investment in transport infrastructure development.

"We need two million parking spaces, this is the same 20 million square meters of various types of construction. There is a huge investment potential," said Sobyanin. The new mayor at the outset of his work began to pay special attention to solving transportation problems in the capital region. According to the ASN-INFO, the metropolitan government today issued a decree "On creation of intellectual transport system of Moscow."It is created "in order to improve the traffic situation on the road network of the city and the development of the existing automated information management systems." The Mayor of Moscow Sergei Sobyanin commissioned to develop such a system in late November, adding that the municipality was willing to allocate as much money as needed.

It is planned that the capital Intelligent Transportation System (ITS) will start operating by 2013, and 6.3 billion rubles will be allocated for its purposes. The government promises that the funds will first of all go towards building new subway lines, the development of public transport and the creation of major interchanges. Time will tell if this helps to solve the problems that have been accumulating for years.