Russians get richer and starve 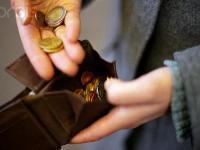 Every 14th citizen of Russia is undernourished, and every 50th Russian simply starves. Every 17th child in the country suffers from undernourishment, UN's Millennium Development Goals in Russia report said. However, official statistics says that the living standard in Russia has been improving greatly recently, with people's incomes growing and the number of the poor decreasing.

Tens years ago, world leaders passed a declaration at the UN Millennium Summit, having agreed to achieve certain results in the struggle against poverty, hunger, illnesses, illiteracy, poor environmental conditions and discrimination of women. The results are to be achieved by 2015, RIA Novosti reports.

The most recent report states that Russia has retrieved the status of a large economic and financial superpower. The nation's primary progress was reached on the decrease of poverty, reduction of child and maternal death rates, and the strengthening of the role of the country as an international donor.

The list of unsolved issues includes high death rate among able-bodied individuals and low life expectancy of Russian men. Russia is the world leader in terms of the gap between life expectancy of men, which made up 12,33 years in 2008. In 1990, the gap was 10.57 years.

According to the UN, the scale of the HIV/AIDS epidemics in Russia has been growing. There is a serious problem about the state support for the adequate infrastructure of the healthcare system, which very often does not correspond to the new epidemiological situation, UN experts believe.
The authors of the report offer to use special programs against poverty in Russia. Growing salaries and pensions improved the situation for the families of poor workers and pensioners.

However, there are no mechanisms in the system of social support in Russia which would prevent the reappearance of such forms of poverty in the event the situation gets worse, which is exactly what happened in the beginning of the crisis in 2008, UN experts believe.

According to official statistics data, the average monthly income per capita in Russia has been growing steadily since 2000. After the crisis of 1998-1999, the real average income per capita has grown 6.8 times. The income level dropped by 6 percent in 2009 as a result of the crisis, though.

It is worthy of note that many of those Russians, who increased their income, can hardly catch up with growing prices. An average Russian family spent 22 percent of their income on food in 2008. In 2009, the index increased to 33.7 percent. The spending on non-grocery goods dropped from 41 percent in 2008 to 37.8 percent in 2009.

The food constituent of family budget is the primary international comparative criterion for defining poverty. Increasing spending on food in a family budget testifies to impoverishment of the population.

According to Slon.ru, seven percent of the Russian population does not receive sufficient nourishment in terms of calorie consumption norms stipulated in the minimum consumption basket. Two percent of the population consume less than 1,500 kilocalories, which is less than the daily need in calories required for metabolic rate. In other words, every 50th Russian starves. About six percent of children (every 17th child) suffers from undernourishment.

Pensioners do not make the poorest category of Russians, as the majority of Russian citizens tend to believe. Families with children are in the most complicated situation. The level of poverty among children is twice as high as among elderly people.