Russian company Orbital Technologies has announced it will have a space hotel in orbit possibly by the end of 2015. This will be the first hotel of its kind, revolutionising tourism and launching the massive commercialisation of space travel, another first for Russia's eternally pioneering space program. 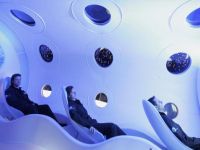 "The first module of the space hotel may be ready in 2012-2013 and will be placed in orbit between the end of 2015 and the beginning of 2016," he declared.  The first module of the hotel will be 20 cubic metres in area, will have four chambers and will be able to accommodate seven people at the same time. The space tourists will be taken to the hotel, to be named "Commercial Space Station" by Soyuz carriers and food and other supplies will be delivered by Progress rockets.

Kostenko declared that the station will be far more comfortable than the International Space Station, because it must have the comforts and trimmings of a hotel, and the cosmo-tourists will be able to observe the Earth through large portholes. This project is being developed with financing from Russian and US investors and through cooperation between Orbital Technologies and RSC Energia.

Apart from cosmotourism, the hotel will have another useful function. NASA will begin the de-orbiting of the ISS from 2016-2020 and therefore the hotel will be the only satellite available for the work to continue, so will be open for astronauts and cosmonauts to live in and conduct their experiments.

On April 28, 2001, Dennis Tito became the world's first space tourist, spending eight days in space aboard the ISS, making 128 orbits together with two Russian cosmonauts, in a joint venture between the Russian Aviation and Space Agency, MirCorp and Space Adventures.