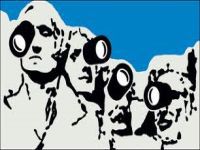 In a massive and coordinated action in different cities in the Midwest of this country, the FBI raided the homes of at least six activists in Minneapolis and 3 in Chicago on Friday, the 24th of September.

In most cases, groups of between 20 and 30 FBI special agents raided homes with search warrants indicating that they are part of an investigation into the alleged involvement of these activists with groups deemed as "terrorist" by the administration of Barack Obama, specifically Hezbollah, the Popular Front for the Liberation of Palestine, the Revolutionary Armed Forces of Colombia and the socialist organization "Freedom Road." For more than 14 hours, between 100 and 120 boxes of personal belongings, documents, computers and electronic devices of those affected filled many cases.

There have been no arrests, but search warrants are for an investigation on a "Grand Jury" on the 5th of October. This so-called legal framework is more like the Spanish Inquisition that exists in America, where during the hearings the lawyers do not even have the opportunity to accompany their clients and where the defendant can be sentenced to between 10 and 15 years of imprisonment simply by inconsistency between their responses and any evidence that has been confiscated during the raids.

Many activists in the city of Chicago and Minneapolis indicated that the raids continue and say that they may spread to cities on the U.S. west coast. Activists such as Tom Burke, Mick Kelly, Joe Iosbaker, Stephanie Weiner and Hatem Abudayyeh, who also have been strong supporters of the Bolivarian Revolution in this part of the U.S., are the most prominent figures who are the subject of intimidation by the FBI including left activists fighting for peace in the Middle East and Latin America.

The aforementioned activists have excellent records of progressive social struggle and are respected by the entire progressive community in the country's Midwest. "There is no way to be involved in illegal acts against the U.S. ... it is impossible to do anything illegal because they know that they are always being watched by the security services simply because they are socialists" stated one of the activists present at the Iosbaker house where they showed their solidarity during the raid on Friday.

Yesterday in Chicago a press conference was held by the defense lawyers and some of those affected. It was held at the Puerto Rican Cultural Center where Melinda Power is the lawyer who has assumed the defense of persons in this city. Everything seems to indicate that it could generate an adverse outcome to that expected by the U.S. authorities. Some activists suggest, "noting that instead of general panic and fear among those affected, it seems to be more powerful in activating coordination between the different factions of the left in the U.S." They are eventually ending up realizing that the administration of Barack Obama may be even more reactionary than the former President George Bush, because an operation of this nature can be initiated only with the consent of the White House and people who control the Department of Justice and the judicial system.

Activist groups also friends of the victims question whether this attack could also aim to deepen the media onslaught launched daily from this country against Venezuela which has intensified in recent days, just hours before the parliamentary elections, whose results are not liked by right wing forces in this country and its friends in Venezuela.

In the next few hours new elements will probably appear that will more accurately gauge public opinion about the direction to take. This deplorable incident brings to mind the McCarthy era and its implications for the mobilization of social groups of the left in the USA.