It is not possible to think of development without valuing people 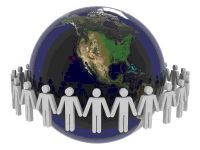 Development in its multiple manifestations, is not a question of having, but of being more. Sages and philosophers of all ages and all backgrounds prophesied about this. Gandhi argued that development would be good and fair only if the status of more modest are elevated. In defense of an economy with a more human face, Father Louis Joseph Lebret pointed out that development should not be viewed solely through an economic lens (material accumulation), but also by the social, ethical, political and moral. Adam Smith, keen to study the wealth of nations, said that true wealth is to be judged by the standard of living of families.

So well. If the premise is true that a good economy is one that works, the economy in order to function well and do justice to its status as a science belonging to the field of humanism needs to include people. That said, it is noteworthy that the inclusion of people is undoubtedly for assessing the standard of living of families. Inclusion is associated with well being.

It is by the inclusion of people, making them participants, can we then measure the axis of freedom and betterment of each. This implies, however, capturing the social reality. Put another way, this should be the main focus of economic concerns. It is no coincidence that there is a consensus to say that economic growth is accompanied by a flowering of freedom. Such freedom only becomes complete when it incorporates in its essence the most important imperative: social justice. In turn, social justice is another name for an economy that is built into the central idea you want to put progress in the service of the poorest. Those who drive (and participate) (d) modern economies - the economic agents - must be aware of this premise.

Definitely, you cannot think of development without valuing people, and it is not possible to speak about the growth of freedom and social justice knowing that a third of humanity is plunged into misery. Further delaying the solution of this enormous and inhuman problem is procrastinating the evolutionary scale of life. Before that, it is to insult the ability to live in balance and in harmony with themselves and others.

Now if every social problem requires an economic solution, then the economy is the height of solving this ignominy. Although, before action consensus is necessary. Why do we say this? Because the divergence in this case hardly divides and does not allow building the new. Let's see what the confusion and the pandemonium, in terms of conducting economic activity tends to be established, which prevents, above all, pointing and surveying the horizon clearly.

When it comes to economic matters, there is much more commonplace terms for dissension than consensus. Take the prism to try to understand the meaning of law and fact for development economists. In detail, some say the best policy would be development that enriches individuals. Others, more concerned with social reality, point out that the best policy is to disimpoverish the needy.

These are on the side of those who think before they need to destroy the foundations of poverty in order to solidify the economy and society with an ability to thrive without the most social cruel stains of modern times: hunger, poverty, social exclusion. The latter is still knowing that an economy goes bad and regresses when the speculation and the tricks of the financial market become more attractive than the creation of new activities that arise from new ideas that are, in turn, centered on the value of human capital.

When human capital (the intellect) is to be valued and included in terms of economic policies, the satisfaction of each one enhances the scale exponentially. If the central idea of the economy (both science and productive activity) is not the inclusion of people, the economy fails to make sense since this science was born to give good answers for how to improve the lives of each one.

To modern economists who base their actions on that line of thinking it is time to announce a message coming from the academy. From there, Edmund Phelps, Nobel laureate, says that "good is the economy that satisfies the desire for a good life." Anyone want a better life aspiration than to feel good and be included?

So if economists have a well-defined function that is certainly to be involved in the process of economic and social transformation. The economy and modern economists have, in terms of analysis and action, achieved social objectives. As it is not possible to think of development without valuing people. Without inclusion, there is definitely no progress!