Irregularities Close American Wal-Mart for the Second Time in Brazil 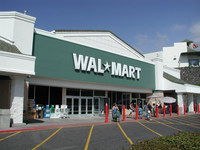 Irregularities Close American Wal-Mart for the Second Time in Brazil

VITORIA / BRAZIL - The American Wal-Mart, a multinational chain of supermarkets scattered across 11 countries, had its branch in the city of Victoria, southeastern Brazil, closed a second time by order of the local authorities. The owner of Wal-Mart (2.1 million employees in 11 countries where it has subsidiaries) is the American Samuel Robson Walton who, according to Forbes magazine, is the 10th richest man on the planet.

The first time that the branch of Victoria was banned was in April this year, by order of the Sanitary Authorities, which would have seen, on occasion, "poor hygiene" at the site. This time, the closing of the Wal-Mart store in Victoria was due to disputes with the Treasury review of Espirito Santo in Brazil, which suspended the state registration because of failure to file reports with the State Revenue Department.

The State Revenue Authority of Espirito Santo said it ordered the closure of the store, banned sales and issuance of coupon tax. A poster outside the supermarket stated "closed due to technical problems." According to the Department of Finance, if irregularities are found, such as issuing invoices - which are not valid until the registration is suspended - Wal-Mart can be penalized with a fine and seizure of equipment for issuing coupon tax.

The office of Wal-Mart Stores Inc, notes the company learned of the situation in Victoria "via the Official Gazette that the State Registration of our shop was suspended. Under the law, we temporarily closed the unit and we are contacting the Department of Finance to understand the reasons and take the necessary measures to re-operate as soon as possible. "

According to the Ministry of Finance, since March the agency asked Wal-Mart for the delivery of tax books for an audit to be made, and as the documents were not available, there was the suspension of registration. In 2005 a Norwegian ethical committee concluded that Wal-Mart "systematically violates human rights and labor rights of its employees, systematically employs minors in hazardous working conditions, discriminates against women and does not weigh up the Overtime of employees ".