The dollar rate may drop from the current level of 31 to 28 rubles per dollar by the end of 2012, whereas the Russian ruble may grow against major currencies of the world by 20 percent, a report from the Ministry for the Economic Development of the Russian Federation said. The growth of the Russian currency may occur even faster due to the weakening of the euro, the ministry’s moderately optimistic forecast for 2011-2013 said. 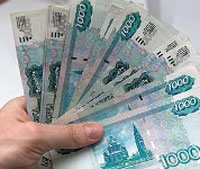 As for another category of Russia’s important export products – metals – the price tendencies on this market will follow the situation with the oil prices. The general recovery of the world economy and industry, especially in China – the world’s largest consumer of metals - will expert serious influence on the market of metals. The speedy development of the construction industry in China, the launch of ambitious infrastructure projects in India and other developing states gives every reason to speak of favorable conditions of the market for the period before 2013 even if the growth of the world economy in general slows down.

However, if oil prices fall below $60 per barrel, the situation with currency rates will change considerably, and the strengthening of the ruble may not happen at all.

The strengthening of the Russian currency, if happens, will lead to the increase in prices on Russian export products. At the same time, the export from the countries of the eurozone will become more competitive against the background of the weaker euro. The countries of the eurozone are Russia’s basic trade partners. A stronger ruble and Russia’s future membership at the WTO may cause serious damage to many branches of the Russian industry.

Experts still say that the US dollar remains the most comfortable savings currency.

“The euro rate is expected to stay within the range of 1.2-1.3 dollars per euro during 2010-2011. The dollar may then decline against the euro as soon as Europe extricates from the crisis. The euro may again rise to the level of 1.4 dollars per euro by the end of 2013,” the above-mentioned report said.