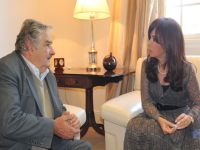 The presidents of Uruguay and Argentina, Cristina Fernández and José Mujica, advised by several of their ministers, met on June 2 at the Presidential Estancia Anchorena, in Uruguay, to address a broad agenda aimed at boosting relations between the two countries which had deteriorated after four and half years of bitter controversy over the installation of a pulp mill whose effluents are dumped into the waters of the Uruguay River bordering the two states.

Shortly after taking office in 2005, President Tabare Vazquez authorized the start of construction of the pulp mill by the Finnish company "Botnia" in the province of Fray Bentos, on the shores of the Uruguay River. It was the culmination of a project of the Partido Colorado, currently in the opposition, supported by the World Bank, whose first step was the enactment of the 1987 Forestry Act and the Frente Amplio gave their endorsement which was the final coup de grace to authorize construction of the plant.

The production of cellulose, an alleged polluting effect of waste, is discussed by specialists and opposed by organizations that support environmental preservation, such as Greenpeace. Added to this is that Uruguay was bound by the 1975 Treaty of the Uruguay River, to report to the Joint Commission created by this document and adhere to its opinion. This procedure was not met and the mistake of the decision of April 20 this year was just confirmed by the International Court of Justice in the Hague.

The Uruguayan government's decision to authorize the construction of the plant, provoked violent reaction of a social sector in the Argentine city of Gualeguaychú, Province of Entre Rios, located on the opposite side of the river, which decided to block the bridge, "General San Martín," which links the city Entrerriana with the Uruguayan city of Fray Bentos. This reaction was supported by the Governor of Entre Rios and even by former Argentine President Nestor Kirchner, in the context of an election campaign.

The Uruguayan government protested the blockade, which at times spread to the other two bridges on the same river, saying it violated the Treaty of MERCOSUR since it was blocking the movement of trade and people between two integral countries of the area.

There were attempts to find a solution to the dispute. President Vázquez met in Santiago, Chile, on March 11, 2006, with President Kirchner and Vazquez called the company Botnia to suspend the works for 90 days, to continue the search for a solution to the dispute. The company said it would not take this step and was supported by the opposition parties-the Colorado and Blanco. Vazquez did not insist, and in his public speeches, later raised a critical tone of the blockade and the passivity of the Argentine government, creating a climate of chauvinism that was quickly echoed at the level of the media and broad popular sectors where there were underlying old rivalries originating in the political history and the sports field of both states.

The FTA with the United States

Another timely issue of much greater strategic importance than this was added: the way for Uruguay's integration into the world.

Conservative parties, Colorado and Blanco, since the dictatorship of Colonel Lorenzo Latorre, 1876-1879, were put in power by the major wool cattle dealers, farmers andbigexporting and importing businesses, who aligned their economic relations with England that I can specify the role assigned to Uruguay as that of a "buffer state," by "Doctrine Canning" for British imperialism aimed at driving a wedge between Argentina and Brazil to avoid losing influence in the region. After World War I, Uruguay sought external support in U.S. imperialism.

The Uruguayan left has historically been anti-imperialist and in the twentieth century, like all the Latin American left, believes that U.S. imperialism is the main enemy of the people.

Nevertheless, when President Tabare Vazquez announced his cabinet in February 2005, Mr. Jorge Lepra appeared on behalf of the Ministry of Industries. Lepra had no political background and less on the left. He was a former manager of the U.S. oil company "Texaco."

Soon the mystery was unveiled. Their task was to implement an FTA (free-trade agreement) with the United States, an agreement that Uruguay could not sign unilaterally, outside the margin of the MERCOSUR since the tariff concessions were violating the Common External Tariff. The first step had given the government of Jorge Batlle ( 2000-2005), of the Ciolorado Party, which had prepared an Investment Treaty, which he sent to the Legislature, in January 2005, for the launch of the Frente Amplio that had absolute majority in the chambers. This means that the conflict over the pulp mill served as a "smokescreen" for a much larger operation: a strategic alliance with the United States, the wrong way, against anti-imperialist continental integration.

During the election campaign, the Frente Amplio candidate for President ofthe Republic, gave clear signals on his trips to Argentina and unofficial contacts held with the Argentine authorities that he intended to mend relations with the neighboring country and give further impetus to Latin American integration. After taking office, he visited the three countries, where he expressed the political will of the new government, there were Argentina, Brazil and Venezuela. Anchorena

The presidential meeting in Anchorena is the result of the work of both foreign ministries to prepare an agenda of 27 items, which expresses the will of both governments from the River Plant region to continue the course marked by the epic Latin American independence which the people celebrate its bicentennial this year.

The Declaration of the Presidents Fernandez and Mujica, and then the press conference, reveal the intention of addressing common problems in energy, trade, military, dredging of the frontier rivers, and joint monitoring of the "health" of the Uruguay River among others. The latter in compliance with the ruling of the Court in The Hague.

The blockade of the bridges will have freed the Argentinian social and political "persuasion." President Cristina Fernandez condemned the blockade, but stated that her government will not use force to repress, following the policy that she has traced in reducing spending. She added that the opposition in Argentina wants to push her government towards a policy of repression so that they can then create scandals when victims appear.

The leaders pledged to implement projects in future meetings with the agreed agenda.