The Brazilian Air Force (FAB) officially presented and incorporated into its fleet of aircraft its first three attack helicopters, the MI-35, purchased from Russia and baptized HA-2 Sabre. This is the first time Brazil will have Russian-made helicopters. The event, held at the air base in Porto Velho, Rondônia, Amazon Region, was attended by the Defense Minister, Nelson Jobim, the Air Force commander, Brigadier of the the Air Force, Juniti Saito, the Ambassador of Russia to Brazil, Vladimir L. Tyurdenev and other officials. 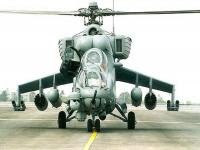 These first three aircraft, out of a total of 12 already acquired, were in Rondônia since December last year, but only now, four months later, they were officially received by the FAB in total operating condition. During this period some differences in Russian standards have been resolved, as the FAB was accustomed to equipment with NATO standards. However, these initial difficulties are considered normal since this is the first Russian-made aircraft acquired by the Brazilian Air Force.

The arrival of the Sabre to the FAB breaks a lot of taboos, it is the first Russian military aircraft acquired by Brazil and FAB's first helicopter designed specifically for war. The attack helicopter used by the FAB was the H-50 Squirrel, for civilian use, adapted for military missions, while the Sabre was designed with military DNA.

The MI-35 is the export version of the Russian attack helicopter Mi-24 Hind, having made its first flight in 1969, and carrying in its baggage several years of upgrades based on combat experiences, besides operators across all continents . It is estimated that more than two thousand units have been produced and are operated in some 60 countries. The popularity of MI-24 is due to the fact that it has participated in about 20 conflicts, including the Soviet invasion of Afghanistan, the Iran-Iraq War, both Gulf Wars, Kosovo and several African conflicts.

In the Brazilian version, its ability to attack is on account of a double-barreled cannon mobile NPPU23 23mm, positioned under the "chin" of the aircraft. Unguided rockets and 80mm anti-tank missiles Ataka 130mm, also Russian-made, complete the integrated weapons.

Combined with arms, is the ability to use night vision goggles for pilots, the presence of active and passive sensors such as an infrared radar and camera and an armor-plating able to withstand projectiles of 20mm. These features make the AH-2 a genuine attack helicopter with real ability to fire armor, including the most modern.

A unique capability of this model is the presence of a small passengers' cabin in the center of the structure, which does not exist in other attack aircraft with this feature. This cabin, although small, is very useful for infiltration or extraction of a special operations group, rescue of persons in the conflict zone and aero medical evacuation.

The Sabres will be operated by the Squadron Poti, as watchdogs of the Brazilian Amazon and frontiers of the region. Old Oporto is about 190 km away from the border with Bolivia, and HA-2 has an average range of 450km. Their missions may be escorting other aircraft, escorting and protecting groups on the ground, creating a perimeter of security and closure of airspace, with the inclusive capacity to shoot down other helicopters or small planes used by drug trafficking in the region.

Minister Nelson Jobim said that Brazil is not only a liquid buyer of Russian goods, since the purchase of the helicopters will have a counterpart to Russian government investments in Brazil in training and professional qualification. "There was a time when the Brazilian government was a mere buyer, today we are able to, together with the purchase of equipment, carry out partnership with the countries' vendors," said the minister.

The new FAB weapon has a number of resources that the Brazilian helicopter pilots, until now, had only seen from afar. The aircraft has armor-plating, 23 mm organic cannon, double-barreled, mounted on a mobile tower front, the ability to launch rockets and surface-air missiles, suppressor of heat that hinders the vision of aircraft by infra red and a series of counter -measures.

"I get a shudder. It is an operational leap hoped for by generations of helicopter pilots of the FAB, "said Lt. Leonardo Bezerra Salim, one of the pilots of Squadron Poti, which is already operating with the new aircraft.

The Sabres will enhance the quick response ability and the presence of the FAB in the Western Amazon region, a strategic region for Brazil, working in the policing of local airspace and helping to curb illegal activity in the border area. Squadron Poti and its new AH-2 Sabre will be powerful tools that protect the Brazilian Amazon and from now on will be ready to face any threat.

The MI-35 is manufactured by the Russian company Rostvertol and negotiated with the Russian state Roboronexport, responsible for all sales of defense equipment from Russia. The 9 remaining helicopters will be delivered by Russia to Brazil by the end of 2011. The purchase was formalized in October 2008, involving a package formed by 12 more helicopters and arms supplies for maintenance for five years at a cost of $363.9 million.

However, as commercial compensation (offset), the Russians will invest half of the value of the purchase price in tools installation, workbenches and training maintenance breaks, which will be done mostly in Brazil, and training of pilots and mechanics, besides a flight simulator.

The Air Force commander, Lieutenant Brigadier of the Air Force, Juniti Saito, celebrated the incorporation of the new equipment to the arsenal of the FAB saying it is a "fighting platform with stealth capability, weapons of high precision and lethality." According to Saito, the helicopters are ready for missions of air superiority and interdiction, both daytime and nocturnal.