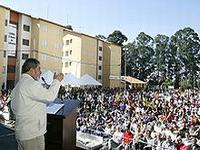 President Luiz Inacio Lula da Silva was elected on Thursday (29th) by the North American edition of Time magazine as the most influential leader of the world. According to companies that specialize in communication, Time is now the largest circulation weekly magazine on the planet.

Lula leads the ranking of 25 names and is followed by J.T. Wang, chairman of the personal computer company Acer, Admiral Mike Mullen, Joint Chief of Staff of the United States, U.S. President Barack Obama and Ron Bloom, senior advisor to the Secretary of the United States Treasury.

In the profile written by filmmaker, Michael Moore, the Zero Hunger program is cited as a highlight in the PT government, as one of the achievements to lead Brazil to the "first world." The history of Lula's life is also emphasized by Moore, who calls the Brazilian president "true son of the working class in Latin America."

The magazine remembers when Lula, aged 25, lost his first wife, Maria, eight months pregnant, because the two did not have access to a decent health plan.  Being ironic, Moore gives a message to the billionaires in the world: "let the people have good health care and they will cause much fewer problems for you."

The "Times" list is divided into four categories: leaders, heroes, artists and thinkers. Lula leads the ranking of the 25 most influential leaders of the world.

Below is the list of 25 most influential leaders in 2010, according to "Time":

Following is the translation of the profile written by Michael Moore about Lula:

When first elected Brazilian President in 2002, Luiz Inacio Lula da Silva, the barons grabbing the country nervously checked the indicators of fuel for their jets. They had made Brazil one of the most unequal places on Earth, and it seemed that the time had come for retaliation. Lula, 64, was a genuine child of the working class in Latin America, in fact, a founding member of the Workers Party, who had already been arrested for leading a strike.

By the time Lula finally won the presidency after three failed attempts, he was already a familiar figure in the national life of Brazil. But what had led him to politics? Was it your personal knowledge of how many Brazilians have to work hard just to survive? Having been forced to quit school in fifth grade to help support the family? Having worked as a shoeshine boy in childhood? Having lost part of a finger in an accident at work?

No, it was when, at age 25, he saw his wife, Maria, die at eight months pregnant, along with their baby because they could not afford decent medical treatment. There's a lesson there for billionaires of the world: allow people to have access to good health care and they will not cause many problems in the future.

And here's a lesson for the rest of us: the great irony of Lula's presidency, he was elected to a second term in 2006 and is still going to complete it this year-is that, while he leads the way with Brazil now part of the First World with programs such as Zero Hunger to eliminate starvation and projects to improve education for the working class of Brazil, the U.S. seems more every day that passes, with the former Third World.

What Lula wants for Brazil is that we used to call "The American Dream." In contrast, we in the U.S., where the richest 1% of the population now has more financial wealth than the poorest 95%, we are living in a society that is rapidly becoming like Brazil was.