Unemployment in Russia Still on the Rise

Over 2 million people have lost their jobs in Russia since September of 2008. Officially, employees leave jobs “on their own free will” or “by agreement of the parties.” According to the data of Russia’s Federation of Independent Unions, approximately 20% of those laid off later return to their employer at a lower salary, Interfax reports. 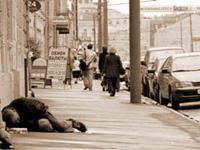 Unemployment in Russia Still on the Rise

During the period of March 17 through March 24 the number of officially registered unemployed in Russia has decreased by 0.6% to 2,261 million people. According to statistics provided by the Ministry of Public Health and Social Development, 1.03 million people have lost their jobs since the beginning of the crisis. Only 293 thousand people regained employment, 167 thousand with their former employers.

“The analysis of organizations we monitor reveals that, unfortunately, the number of unemployed is not decreasing. In the first six months of the year we are observing growth of unemployment calculated according to the methodology of the International Labor Organization. If financial markets and our industry revive, then, of course, we expect that in the next six months unemployment will start decreasing,” says Mikhail Shmakov, head of the Federation of Independent Unions (FNPR) at his meeting with Vladimir Putin.

Specialists with the United Nations Population Fund think that there is still some risk of a new wave of unemployment in Russia. “The speed of increase in unemployment is now lower than the drop in GDP and industrial recession; yet, previous crises show that such time lapse is normal. The crisis of unemployment has not yet occurred,” says the report of the Fund “Social and demographic development of Russia” issued on Wednesday.

Growth of unemployment is hindered in Russia due to the policy for labor hoarding in the labor market conducted by all economic entities. Now, disguised unemployment remains common.

“Disguised unemployment is very attractive for employers many of which would be completely satisfied with sending two employees to unpaid leave instead of laying one person off. The economic effect remains the same, while there are no complaints from regional officials. I believe today this type of unemployment is not any lower than general unemployment in both absolute and relative terms, which is now approximately 7 million people,” stated Nikolai Volgin, chair of the department of labor and social policy of the Russian Academy of Public Administration to Interfax on Thursday.

According to FNPR monitoring in February and March (233 organizations), majority of companies with part time schedule for all or a part of the staff are in the construction and industrial manufacturing sector (16.4%), mechanical engineering (12.1%), radio and electronic sector (10.1%), agricultural complex (6.1%).

The Ministry of Public Health and Social Development is also concerned with growth of unemployment that may negatively affect the revival of Russian consumer activity observed lately. Officially, the level of registered unemployed in 2010 is expected to be 2 million 200 thousand people.