Dmitry Medvedev's initiative on the transition to energy-saving lights is supported by 55 percent of Russians. This data is from a survey conducted by the All-Russia Public Opinion Research Center (VTIOM). The majority of residents endorsing the president were from the Urals (69 percent), residents of medium-sized cities (59%) and highly educated respondents (64 percent). A quarter of the respondents (25 percent) responded negatively to this initiative. 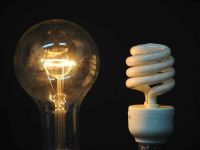 These tended to be from the Far East (38 percent), Moscow and St. Petersburg (37 percent). It is worth noting that refusal of incandescent lights was generally 72 percent and 47 percent of the poor.

Those who favor the transition to energy-saving lights, argue, first of all, that they are more economical. The second leading reason - to save money. Among other reasons - the "obsolescence" of incandescent lights, a longer period of use for energy saving bulbs, the brightness of light and environmental friendliness.

Opponents do not approve of the refusal of incandescent lights, explaining their attitude is mainly due to the high price of energy saving lights (35 percent). Many of the respondents in this group believe that the new lights are harmful to health (20 percent).

According to the poll, most Russians recognize the importance of energy conservation: 38 percent believe that this is a priority task that requires an immediate solution, and 42 per cent say although regard it as a serious problem, but only in conditions of crisis, the idea is to focus on other more pressing issues.

Among other arguments received - poor quality, dim light (up to 14 percent), denial of choices (10 percent), lack of significant differences from the traditional energy-saving lights (9 percent), problems with disposal (5 percent). The importance attached to the issue of energy efficiency by Russians (86 percent).

Only one in ten respondents (11 percent) believes that this is a topic that has nothing in common with real problems - mainly because they think about low-income fellow citizens (14 percent).

That the problem of energy efficiency should be addressed immediately, as a rule, was agreed to by the inhabitants of the Northwestern District and Siberians (43 and 45 percent respectively). In the Urals people were most inclined to believe that in a crisis it is a no less important task. In the Central District were most of those who do not consider it a real problem.

On the coming transition to energy-saving bulbs, 85 per cent of those surveyed: 38 percent are well informed about this, 47 per cent - heard something about it. This is mainly 35-59-year olds (88-89 percent) and highly educated Russians (92 percent). Only 14 percent first learned about this from the interviewer. In the dark there are usually 18 to 24 year olds (23 percent) and ill-educated fellow citizens (29 percent).

Translated from the Russian--Science and Technologies by: