Green and Meatless McDonald’s Will Not Work in Russia

McDonald’s restaurants in Europe will all turn dark-green following the fashion of ecology-friendly production and healthy food. About a 100 of McDonald’s restaurants in Germany will undergo the green restyling by the end of the outgoing year. The New green McDonald’s will embrace the whole of Europe in 2010. The globally recognized red and yellow colors of the fast food trademark will be replaced with green and yellow colors. The green McDonald’s will hit Russia next year, but experts are skeptical about the new trend, GZT.ru website said. 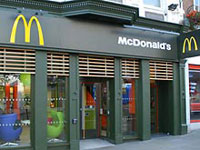 Green and Meatless McDonald’s Will Not Work in Russia

Russian experts believe that there is no need for the Russian McDonald’s to hold the restyling in the country. The current concept – “funny and tasty” – works very well in Russia. Ecology will not work for Russia, for the Russians mostly do not care about ecology. Besides, no one has proved it yet that the green color is vital for the fast food industry to earn the ecological image.

The “green fashion” does not enjoy popularity in Russia at all. The same can be said about healthy food. The vast majority of Russians like eating meat, and they will not trade it for vegan dishes which often appear in the range of McDonald’s.

The green rebranding will not hurt McDonald’s reputation in Russia, experts assure. The corporation owns one of the world’s most recognizable trademarks. The change of colors will not affect the trademark from this point of view. Most likely, the corporation will conduct a massive advertising campaign in Russia which will make customers forget the red color quickly.

McDonald’s began to assure customers of its healthy food in the beginning of the new century. The Russian division of the company followed the head corporation and expanded the range with vegetable salads and provided recommendations for proper nutrition.

Newsweek magazine placed McDonald’s on the 27th place on the list of America’s greenest companies, which sparked outrage with green activists who traditionally criticize the food chain.

In Moscow, McDonald’s has no competition. It is the most popular fast food network in Russia’s capital. Indeed, it enjoys great popularity, especially among young people, and are usually very busy.