Recently, Russian officials remembered about the lost Soviet investments and decided to significantly increase compensation to the investors. For the first time after recognizing Soviet investments as internal debt, the Russian Ministry of Finance will repay 3 Russian rubles per each Soviet ruble, instead of the previous 2:1 scheme. The state cumulative investments debt is estimated to be $900 billion. Experts doubt the fairness of the new repayment scheme and believe that the rates of 1:30, 1:80 and more would be more appropriate. 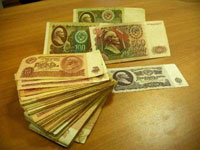 According to Nezavisimaya Gazeta newspaper, the Ministry of Finance released new compensation rules that are directly linked to investors’ age. For example, people born before 1945 will receive three-fold compensation based on their accounts balances as of June 20, 1991.

The main issue the investors have with the Ministry of Finance is that instead of developing a schedule for final repayments of investments counting inflation, the Ministry is offering bizarre schemes with symbolic sums of money. The ministry is not discussing the final date of the repayments either. Both independent specialists and the Ministry representatives explain that the state budget does not have enough money to provide adequate compensation.

“Two- or three-fold compensation cannot completely cover the losses of Soviet investors. Yet, despite the increase in the budget deficit, the government cannot completely discard the repayments since this step will not be popular,” said Timur Unarokov, leading consultant of Intercom-Audit.

The “fairness” that the Ministry of Finance is trying to implement, is criticized by many economists. “Honestly, the payments must be based on realistic indexes, for example, minimum consumer baskets of 1991 and today. A fair scheme would also consider interest,” explained Sergey Shandybin, analyst of Razvitie group.