Bank of Russia To Invest in Canadian Dollar

The Central Bank of the Russian Federation is going to invest a part of the funds of Russia’s international reserves into the tools nominated in the Canadian dollar, RIA Novosti reports with reference to Sergey Shvetsov, the director of the CB’s department for operations on financial markets. 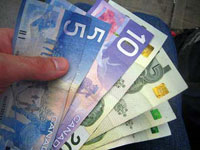 Bank of Russia To Invest in Canadian Dollar

“We are currently conducting technical preparations for operations with the Canadian dollar. There can be one or two currencies added afterwards, and that would be it,” Shvetsov said at the State Duma during a session of the council for credit policy.

The official reminded that the Central Bank was investing the funds of Russia’s international reserves in four currencies: the US dollar, the euro, the British pound sterling and the Japanese yen. In addition, the reserves consist of gold and IMF’s special drawing right.

Chinese media reported with reference to Russia’s Finance Ministry at the end of October that the Bank of Russia could include the yuan in the structure of its international reserves. However, the information has not received an official confirmation yet.