Russian law-enforcement agencies start to get involved in the anti-alcohol campaign, which President Dmitry Medvedev announced. The sales of strong alcohol beverages at bars and restaurants of Moscow airports will be banned. Prosecutors will probably ban the sales of alcohol at duty free stores – they are currently looking for legal reasons to substantiate the endeavor, The Vedomosti newspaper wrote. 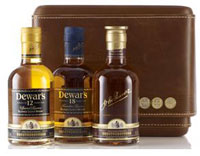 Law-enforcement agents have become frequent guests at restaurants and bars of Moscow airports recently. They visit the shops for inspections making references to the Law about the State Control of Production and Circulation of Alcohol. Article 16 of the law bars the sale of alcohol beverages (stronger than 15 percent) in public places and in places containing sources of heightened danger, to which airport particularly refer.

The inspections are finished at Sheremetyevo Airport, but continue at Domodedovo and Vnukovo. Restaurants have 60 days to correct their mistakes. If the sale of strong alcohol continues, the shops will be closed for three months.

Prosecutors do not mind limiting alcohol sales at duty free stores, but they have not found the legal reasons for it yet. Selling alcohol on board passenger liners is not forbidden, they are not included on the list of places of public gatherings and sources of heightened danger.

Dmitry Medvedev stated August 12 that he was gasping at the number of bottles of vodka which the Russians drink. He said that he was going to struggle against drunkenness in Russia, although, he added, he would not be practicing “foolish bans.”

Russian deputies have already prepared a package of anti-alcohol bills that is ready to be submitted to the State Duma. However, the authorities have not offered anything serious. Several Federation Council officials only said that the government could restrict the sale of alcohol to pregnant women, require IDs when selling alcohol to young people, or ban the sale of alcohol to those individuals who look like alcohol addicts.