The International Monetary Fund published a report about the situation in the Russian economy in 2010. The nation’s GDP will drop by 7.5 percent in 2009, which is a larger number than in the previous report, but a smaller one if compared with the expectations of the Russian government. As for the next year, the IMF is more optimistic about it and expects a 1.5-percent growth of the GDP. 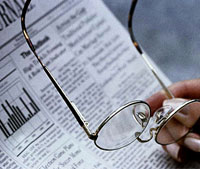 The IMF’s World Economic Outlook said that the Russian economy would start to grow in 2010. The inflation rate in 2009 will make up 12.3 percent and slide to 9.9 percent in 2010, Interfax reports.

The economic recovery next year will be connected with the expected growth of oil prices and the package of bailout measures, which were taken in the whole world.

The average price on oil will make up $60 per barrel until the end of the current year. In 2010, the price is expected to grow to $75.

Russia has the oil-dependent economy. Therefore, the IMF considered alternative variants of its development. It is not ruled out, the report said, that Russia may suffer another phase of the banking crisis in 2010 since the improvement of the economic situation in Russia can not be described as irreversible yet.

The World Bank expected that Russia’s GDP would return to the pre-crisis level only at the end of the third quarter of 2012.

As for the views of the Russian administration, the government approved the macroeconomic forecast of the nation for 2010-2012 last week. The document stipulates the growth of the GDP by 1.6 percent in 2010, by 3 percent in 2011 and by 4.3 percent in 2012.

Speaking about the growth of the international GDP, the International Monetary Fund improved its previous forecast of 2010 to 3.1 percent from 2.5 percent reported in July.