Russia does not possess several technologies required for the development of the Shtokman field – one of the world’s largest natural gas fields – in the Barents Sea. A number of works, including the building of deep-water pipeline, will most likely be conducted by foreign contractors, RIA Novosti news agency said with reference to Dmitry Dmitriyenko, the governor of the Murmansk region. 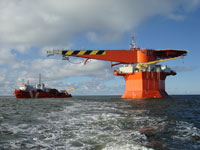 “Russia’s experience in building pipeline systems at such large depths is very limited. Most likely, Russian contractors will not be involved in those works since we do not have the required technology,” the governor said at a news conference Monday.

“As for the works that Russian companies can do, the Shtokman Development Company, which operated the first stage of the project, can only confirm that it will give first priority attention to Russian contractors,” the official said.

The governor said that the participation of foreign contractors may result in the import of technologies, which the Russian companies need to develop.

Shtokman Development AG (registered in Switzerland) was established in February 2008. The shares of the company are distributed between Russia’s Gazprom – 51 percent, France’s Total – 25 percent and Norway’s StatoilHydro – 24 percent.

The company serves as the owner of the infrastructure of the first phase of the Shtokman field development project for 25 years.

The Shtokman field reserves are estimated at 3.8 trillion cubic meter of natural gas and more than 37 million tons of gas condensate. The Shtokman field was discovered in 1988. It was named after the Soviet geophysicist Vladimir Shtokman, a descendant of German emigrants, whose name were originally spelled Stockmann. The first development phase stipulates the extraction of 23.7 billion cubic meters of gas a year.