The Court of Arbitration of the Republic of Udmurtia registered a petition in bankruptcy of JSC Izhmash (Izhevsk Mechanical Works), the largest firearms maker in Russia, Interfax reports. The court hearings to investigate the causes of the petition will be held on October 7, 2009. 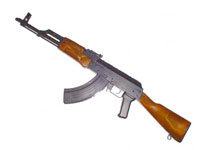 Izhmash ships firearms to 15 countries of the world. Based in Izhevsk and founded in 1807 at the decree of Tsar Alexander I, and is now one of the largest corporations in its field. It makes the famous Kalashnikov series of assault rifle, along with a host of other Russian arms, including medium cannons, missiles, and guided shells. Izhmash also produces other goods, such as motorcycles and cars.

Their products are currently in use in a wide variety of countries, ranging from well established countries such as the United Kingdom, Germany and France to the developing countries of Asia, Africa and Latin America.

Izhmash, the pride of the nation’s defense industry, may prove to be an unprofitable enterprise. Udmurtia’s Court of Arbitration will look into the financial documents of the group of enterprises of Izhmash Concern. If reasons for bankruptcy are unveiled, Russia’s largest maker of firearms will have to be reorganized.

Bankruptcy proceedings, if they take place, will relieve Izhmash of its debt burden.

It is worthy of note that the production at Molotov Works, a part of Izhmash Concern and the maker of the renowned Kalashnikov assault rifle, was stopped not so long ago, news agencies said. The production was stopped due to the absence of the state order: the company has no money to pay salaries to employees and return debts to creditors.