The Prime Minister of Great Britain and Northern Ireland (1997-2007) and Middle East Quartet Representative Tony Blair will take part in the Young Entrepreneurs International Business Forum “Joining Forces to Define the Future”, - as informed in the Forum press center. Mr Blair will be the keynote speaker of the plenary session “Non-economic aspects of entrepreneurship development” (September 16, 2009, Omsk). The participation in the Forum will be the first working visit of Tony Blair to Omsk. 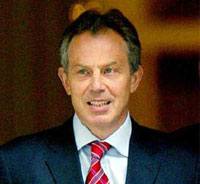 The main spokespeople of the plenary session will be recognized public figures and renowned entrepreneurs from Russia, USA and Europe, including, as previously reported, the 64th Secretary of State of the United States of America and Chair of the Albright Stonebridge Group Madeleine K. Albright. There will be discussed such topical issues as “The role of non-government institutions in the development of entrepreneurship”, “The role of young people in the global development strategies realization”, “The mechanisms of economic integration” and others.

The Young Entrepreneurs International Business Forum “Joining Forces to Define the Future” will be held on September 13-17 in the framework of the Year of Youth in the Russian Federation. The Forum’s main events will be held in Moscow, Kazan, Ekaterinburg and Omsk. The national delegations of young entrepreneurs from 18 countries will take a part in the Forum. The official languages of the Forum are Russian, English and Chinese. The Forum organizers are the Ministry of Sport, Youth Policy and Tourism of the Russian Federation and the Omsk Manufacturing Association named after A.S. Popov.

The Forum agenda includes: “Train of Friendship” Moscow-Omsk with stops and official events in the largest economic and cultural centers of Russia – Kazan and Ekaterinburg; plenary session “Non-economic aspects of entrepreneurship development”; master classes “The Story of Success” and round-table meetings to be lead by the members of the Public Chamber of the Russian Federation, notable economists and leading entrepreneurs.