A successful visit by President Dmitry Medvedev to Mongolia has resulted in numerous agreements, settling a debt issue and launching social and economic development projects in various areas. A strategic partnership has effectively been launched. 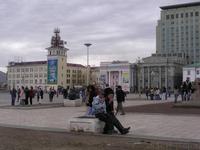 The agreements signed by Presidents Dmitry Medvedev and Tsakhiagiyn Elbegdorzh today in the capital city of Mongolia, Ulan Bator, constitute a strategic partnership being the two countries closer together than at any time since the voluntary dissolution of the Soviet Union (as predicted and catered for under Soviet Law).

Both countries have agreed to set up a joint venture to develop the uranium fields of Dornod in north-east Mongolia and another agreement saw Ulan Bator railways handing over 50 per cent of their stock for the Russian Railways Company to manage. Both parts also declared the will to solve a 150 million-dollar debt question left over from Soviet times as soon as possible.

Both leaders expressed their satisfaction at the new climate of bilateral cooperation, stressing the good prospects for a fruitful future in their joint press conference in Ulan Bator after signing a declaration of strategic partnership.

Among the agreements in the area of cultural ties, Russia agreed to invest more in developing the Russian language in Mongolia.