Russia is not going to give credits to Ukraine to purchase Russian natural gas. Ukrainian Prime Minister Yulia Tymoshenko asked a five-billion-dollar loan from the Russian Federation in February of the current year. It was later reported that Russia supposedly agreed to provide such a loan if Ukraine spent $3 billion of the amount to purchase Russia’s natural gas. However, the government of Ukraine rejected the information in May. 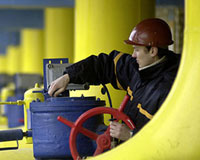 Russian Prime Minister Putin stated at the end of April that his government had not made any decision regarding the loan to Ukraine. Putin said that Ukraine needed the money to purchase natural gas for its underground storage facilities to guarantee permanent transit of the Russian gas to Europe. Putin also said that he would be ready to consider such an opportunity only if the European Union agreed to give Ukraine 50 percent of the amount. Europe assigned the money, but it was a different amount for different purposes.

The amount of the loan, which Tymoshenko asked from Putin - $5 billion – raised numerous questions. Experts calculated that Ukraine’s Naftogaz (oil and gas corporation) would not need $5 billion, and that $1.2 billion would be more than enough. The corporation has already filled most of its storage facilities with fuel.

Jose Manuel Barroso, the President of the European Commission, stated July 31 that the Commission and international financial institutions had come to an agreement with Ukraine regarding the reform of the nation’s gas-transportation system. The agreement, Barroso said, made it possible to render financial assistance to Ukraine.

Brussels believes that Ukraine must split its oil and gas giant, Naftogaz, into two companies. One of them would deal with gas shipments on the home market, whereas the other company would work with the transit of gas to Europe. Such a state of affairs is highly unprofitable for Russia’s Gazprom. The Russian monopoly signed a contract with Nazftogaz as a single corporation before 2020 and intended to participate in the modernization of the gas pipeline transportation system in Ukraine. It would be very hard for Gazprom to reach its goals if Ukraine launches the reform of its gas industry.

It was said that the European Union was ready to give Ukraine not more than $4.2 billion – the amount, which was supposedly required to purchase gas from Russia for the winter period.

It became known in the beginning of August that European banks agreed to assign only $1.7 billion during 2009-2010. Naftogaz would spend only $300 million to purchase gas from Russia. These funds will be enough for Kiev to pay for only one month of shipments from Russia.

Ukrainian officials still hope for the Russian loan. However, it now seems that Moscow decided to leave Kiev alone with its problems.

Naftogaz may raise prices on gas inside Ukraine to be able to handle its payments with Gazprom. In addition, the Ukrainian government increased the authorized capital of the corporation which would give the company an opportunity to repay its external debt.

Kiev expects a higher price on natural gas from the fourth quarter of 2009 or from the beginning of 2010. The price has been going down during the recent three quarters, but oil prices took a different turn: Gazprom’s prices on gas directly depend on the fluctuations of oil prices.

Therefore, it is not ruled out that Kiev will eventually ask Moscow to revise the contract, which may result in another gas conflict between Russia, Ukraine and Europe.