World's Most Expensive Hotel Rooms Can Be Found in Moscow

Moscow is ranked first again on the list of cities with world’s most expensive hotels, a special press release from the British company Hogg Robinson Group said. 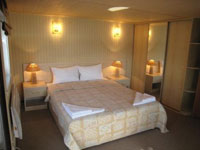 World's Most Expensive Hotel Rooms Can Be Found in Moscow

The average cost of a hotel room in Moscow makes up over 13,000 rubles a night ($420, J268). For comparison, a hotel room in Abu Dhabi (United Arab Emirates) comes second with 253 pounds, whereas one night in Paris costs 203 pounds.

The research said that the cost of hotel rooms in many cities of the world either does not change or becomes lower because of the crisis. Moscow is one of the leaders when it comes to hotel price reductions. A night at a Moscow hotel became 14 percent cheaper in British pounds and 14 percent – in Russian rubles.

Hogg Robinson Group’s research is based on the data received from British travelers mostly. Therefore, the prices indicated in the report may differ from mid-market prices.

It was previously reported that Moscow hotels lost many of its clients because of the crisis. Inexpensive hotels in Moscow were occupied at 40 percent in the second quarter of 2009.