Moscow's Largest Market To Be Replaced with Billion-Dollar Chinatown

The Moscow Government and a Chinese delegation from the Chinese Ministry for Commerce took a decision to construct a new shopping center instead of the infamous Cherkizovsky Market, which is the largest market in Europe. A spokesman for the Moscow authorities, Vladimir Malyshkov, said that China was ready to invest $1 billion in the construction of the new center. 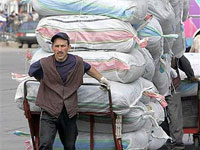 Moscow's Largest Market To Be Replaced with Billion-Dollar Chinatown

The complex is supposed to include a shopping center, a logistics center, a customs point, a two-star hotel and a migration service department, The Kommersant newspaper reported.

The closure of the Cherkizovsky Market in June 2009 alarmed the Chinese authorities. Up to 70 percent of 100,000 people, who worked at that market, were the Chinese citizens. A great amount of goods produced in China remains on the territory of the closed market. The goods are reportedly worth $5 billion.

“Russia and China have reached a consensus on the issue of the Cherkizovsky Market. Our countries will draft a joint plan of fighting against gray imports,” Deputy Commerce Minister Gao Hucheng reported after the negotiations with Moscow authorities.

The new complex, designed to replace the Cherkizovsky Market may occupy a part of the territory of the closed market. Several other sites near the Moscow ring road with areas of 40-60 hectares are also being considered.

“Such districts are known as Chinatown around the world, but I don't like the name. On the other hand, we have an Armenian Trade Center, so why not having a Chinese one too?” Malyshkov said.

The construction of the new complex will most likely take two years.