The Economist compares the dollar price of the Big Mac hamburger in different countries for two decades already, making conclusions about underestimations or overestimations of national currencies. The Big Mac index is based on the theory of the purchasing capacity parity, in accordance with which the currency rate balances out the cost of the basket of goods in different countries. The basket is replaced with the McDonald’s sandwich. The cost of the most popular sandwich in the world in each country depends on the volume of production, the prices on rent, raw materials, labor force and other factors. Therefore, the Big Mac index is the best way to see the mismatch of currency costs in the countries with similar levels of income, especially during the crisis, when the expensive basket is particularly unprofitable. A weak currency gives advantage on expenses and product prices. 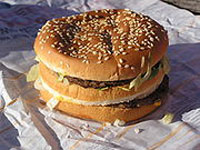 The British pound was 28 percent overestimated on the Big Mac index a year ago. Now its cost vs. the dollar has reached parity after the pound lost nearly 30 percent of its value from August till February. Unlike the pound, the Japanese yen was strengthening its positions, and its price edge of 27 percent has vanished.

Russia has been reducing the gap in the purchasing capacity parity with the United States. The Russian ruble was 29 percent underestimated according to the Big Mac index – similar to the currencies of Japan and Saudi Arabia. The gap has currently grown to 43 percent (the gap made up 51 percent during the devaluation of the ruble in January of this year). If the exchange rate were based on the Big Mac index in Russia, the dollar would now cost 18.8 rubles (the current rate is 31 rubles per one dollar).