The 30th of June is the last day, when casinos and gambling bars are open in Russia. Many of those addicted to gambling may experience very hard times. 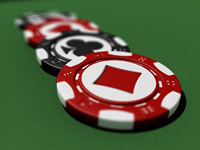 Russia passed a federal law in January 2007, which stipulated the creation of gambling zones in the Far East of the country, as well as in the Altay and Kaliningrad regions and on the border between the Krasnodar and the Rostov regions. The activities of all other gambling institutions in Russia will be ceased on July 1, 2009.

The Moscow police will organize raids in all administrative districts of the capital on Wednesday night to see if the casinos and gambling clubs have been closed. No one doubts that many gambling establishments will try to continue their activities illegally.

The first legal casino emerged in the Soviet Union at Moscow’s Savoy Hotel in 1989. A company from Finland opened the casino exclusively for foreigners according to a special permission from the Soviet government. Another casino opened already in 1990, at another Moscow hotel. About 200 casinos had been opened in Moscow by the end of the 1990s.

Slot machine halls became extremely popular in Russia during the end of the 1990s – there were over 2,100 halls opened in the country with 35,000 slot machined at the end of 2000. About 63 percent of all machines were installed in Moscow and St. Petersburg.

Specialists say that the end of the gambling era in Russia will help many people get rid of their addiction to gambling.

“A person addicted to gambling is not a human being at all. Like degrading alcohol addicts, they lose interest in life, they lose their jobs, families, their social status – their life is all about gambling,” psychiatrist Tatiana Dmitrieva said.