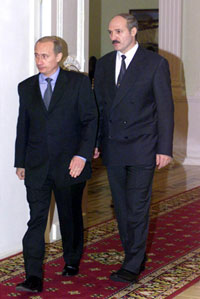 Belarus is the only country enjoying preferences in trade with Russia, he said. “Thanks to the low price Belarus pays for Russian crude and petroleum products, it has become a leading exporter of oil and gas derivatives to Europe. We will keep the price in the near future alongside the trend towards world energy prices,” he noted.

Minsk hopes the decision will be made in October or November.

Being a member of the Russia-Belarus Union State, Belarus pays the smallest price for Russian energy resources, ITAR-TASS reports.

Gazprom announced on Friday it had sent Belarus a letter demanding it pay $244 million in gas debts, and warning that supplies could be cut if the sum is not cleared.

Belarusian First Deputy Prime Minister Vladimir Semashko said on Friday that the government expects Russian gas prices to reach $166 per 1,000 cubic meters on January 1, 2010 if oil prices remain around the $70 per barrel mark this year. The rate is still well below the average rate Russia charges European Union countries for its gas, rian.ru reports.

The countries have in the past also clashed over Russian oil sales to Belarus, which had also been heavily discounted until the end of 2006. After Russia raised the oil price for Minsk, while keeping it below international prices, Belarus imposed a tariff on oil pipeline transit via its territory, triggering a temporary cut-off in early 2007.