US economic indicators rise showing the end of recession

The index of U.S. leading economic indicators rose in May for a second consecutive month and a regional factory gauge climbed more than forecast in June, showing the worst recession in five decades may soon end. 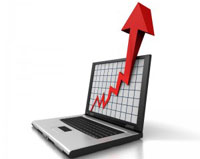 US economic indicators rise showing the end of recession

The leading index increased 1.2 percent after a 1.1 percent gain in April, the best back-to-back performance since November- December 2001, the New York-based Conference Board reported today. The Federal Reserve Bank of Philadelphia’s general economic index jumped to the highest level in nine months.

Stocks snapped a three-day losing streak and Treasury securities fell for a second day after the reports bolstered forecasts the world’s largest economy will begin to grow in the second half of 2009. A third report showed the number of Americans receiving jobless benefits dropped for the first time since January, indicating the job market is starting to thaw.

The leading indicators, which point to the direction of the economy over the next three to six months, were forecast to rise 1 percent, according to the median of 55 economists in a Bloomberg News survey, after an originally reported increase of 1 percent in April. Estimates ranged from a decline of 0.5 percent to a gain of 1.8 percent.

Still, any recovery later this year will not be strong enough to prevent unemployment from climbing even more after reaching a 25-year high of 9.4 percent last month. President Barack Obama in an interview on Bloomberg Television this week predicted the jobless rate will climb to 10 percent, even as the “engines” of recovery have begun to turn.

A slowdown in factory deliveries, which signals an increase in orders, jumps in building permits and stock prices, a gain in consumer confidence and a widening spread between long- and short-term interest rates paced the advance in the leading index, Bloomberg reports.

U.S. households have lost billions of dollars in the stock market in the last two years, and gasoline prices have risen by more than $1 since the start of the year. That could weigh on consumer spending — which makes up 70 percent of U.S. economic activity.

"We're not completely out of the woods, but as long as interest rates stay low and fiscal stimulus keeps coming, equity markets consolidate recent gains, we still think recovery is on track for the fourth quarter," Gautieri said.

The Federal Reserve has set its federal funds rate at a range of zero to 0.25 percent and used unconventional measures to help prompt banks to lend. The government's $787 billion stimulus package is designed to combat the decline in business activity, the AP reports.

Still, some economists say the recession may be followed by a "jobless recovery," as skittish employers remain reluctant to hire, even as their business improves. That shows "how deep a hole we're in," Goldstein said.

The May report, while it signals an end to the recession this year, doesn't mean the country won't spend a while in a "relatively weak economic environment," he said.

Defense contractor Lockheed Martin Corp. this week said it would cut up to 750 jobs in New York, while News Corp.'s MySpace division said it would lay off about 30 percent of its work force, or more than 400 people.