Conservative economics based upon magic, cruelty, fatalism and greed 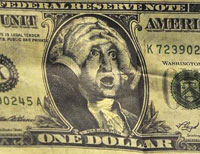 Conservative economics based upon magic, cruelty, fatalism and greed

In life we have the problem of self management. If we don’t manage ourselves, then disaster occurs. Self control is a key trait of this behavior, taking calculated risks is another, a strategy of balance is another. Most people accept this.

We know things shouldn’t simply go out to extremes because disaster will occur, thus, we manage ourselves. We know that we cannot simply do one thing over and over, that we must do many things for a successful project. We know that we should not take big, foolish risks in our personal lives. Should economics be any different? But in conservative economic theory, economics is very different! A big exception is made, suddenly in the sphere of business and finance we have “magic”. While in life we have self control, in economics we have the mysticism of automatic processes. Thus, life is so much easier in the economic sphere; it’s like a big vacation from reality.

In conservative theory all things magically balance out. If real estate prices get too high, then they correct in a natural cycle. Eventually, all false value is removed; buyers lose equity and investors will lose too. So gains and losses exactly equal. The just invisible hand of Adam Smith creates equilibrium; the invisible hand of this invisible god corrects all. This god is all knowing, all powerful. All works out in a completely spontaneous process. Yes, in life you must worry, but in economics we have a great exception to life because here some unknown god is in control. Whereas in your own life or in education or coaching your child’s soccer team or cooking a holiday dinner there is no god to make things work out automatically. Finally, we have a realm of our lives where all is easy and free of worry! What a relief!

All’s well, but upon a second look, reality doesn’t match our fairy tale. Damage is done just as in other human processes, personal or social -- when we let things go to one-sided extremes, when something is overdone, when we take stupid risks. The magical corrections of conservative theory involve catastrophic events. And the problem in the 2008 crash was not that home buyers or the mortgage makers or the purchasers of mortgage-backed “insecurities” were the only ones hurt. Everyone was slammed by the downturn. Even if you were to argue that those who got houses with poor financials were at fault (which is only partly true), still the vast majority of homeowners were not at fault. Millions of innocent people, the vast majority of the population that did NOT buy houses during the bubble; and the vast majority of businesses did NOT buy mortgage securities, yet they are hurt too. So we must ask, “What kind of invisible hand and magic is this?” A magic that meets out punishment for everyone, to the whole nation for the actions of a minority, this is hardly a just economic god.

In conservative economic theory, a recession or depression must be visited upon all households, there’s nothing you can do, you must accept this, the government should not, can not help, everyone suffers for the foolishness of a few. It seems this theory is a bit sociopathic, mean-spirited and uncompassionate. This view is just plain cruel. Modern capitalism is based on money and profit. It’s an objective system that leads to a particular subjective behavior: greed. Greed didn’t create capitalism but greed is its result and greed maintains the system. Conservatism is a fan of greed -- greed is good, and, perhaps, greed is even divine!

So let’s review this theory -- greed leads to loans given to people not qualified to pay them, then greed sells the mortgages to the whole world, then the whole world goes into a big recession. You may object but conservatism retorts that magic solves the crisis automatically by stopping the global economy and balancing things out. And then, you guessed it, greed returns again, and all is well...(after hiding out in the Bahamas for a couple years).

But if greed is so good, why should we have recessions and depressions in the first place?

We are told the individual must learn to restrain his own greed! How does that work? Be greedy but limit your greed? Consider this: You’re in the financial industry; you see others making profit, manifesting their greed. So as a business person you replicate your colleague’s behavior and, more, you must outdo them in approving loans without financial basis -- no jobs, no tax returns, no proof of income, nothing. The profit demand of the economic system requires this, and how will the rational nature of a lonely individual stand up to this pressure? It cannot. The executive cannot fall behind, when you lag, you’re near a takeover; or as CEO you might get fired at the next shareholders meeting. Any logical executive would get way ahead on the greed curve; you can’t have competitors getting stronger than you. This is Business Administration 101. It’s confusing, at what point does your greed get tempered? Tell us about this enlightened greed!? We cannot have any regulation of the financial industry because conservatives would scream “communism”. So then where is the self control?

Consider this: When it’s absolutely clear that one should stop selling bad mortgages, when the market begins to falter, it’s already too late. The crash has begun. From inside the boardroom of a single company one cannot see the whole process, and one doesn’t want to. So there is a big contradiction in conservative thought. You cannot be greedy and wise at the same time. You cannot serve both moderation and mammon. Either you are for a system of maximum profit and fierce competition or you’re not.

If you’re a good capitalist, competition drives you to greed; you must be greedy to survive in this economic system, one has no choice. In a completely free-market notion with no restraints, the cycle continues until there is disaster. Thus, the supposed magical process does NOT result in an elegant, symmetrical correction; it results in full-scale collapse that paralyzes the entire economy hurting many innocents. Everything stops. Money isn’t available, the economy cannot restart without loans to consumers and business; it languishes. Banks have no cash, and those that do will not lend it out, they hoard it to survive bad times.

What actually happened in the 2008 crash was that the government knew but did nothing because of its ties to the very people who created the problem. Finally, government feigned surprise then scrambled, but the problem was many times greater than they had expected, because they had not required reporting from banks on their activities. Since those who are greedy cannot control themselves, in this economic framework other forces would have to intervene -- in our present system that is solely the government. Fortunately, Bush wasn’t a strict conservative or we’d be in a complete standstill today. Bush pursued conservative policies but when the crisis happened, he switched to liberal policies to save us from oblivion. Conservative economics cannot head off crises, it’s helpless, its principles of greed and deregulation lead there inevitably. It’s trapped by its own logic. So we must conclude that the strict conservative view is “fatalistic”. Fatalism is a cousin to notions of magic and spontaneous greed. In this view, there is nothing you can do.

So let’s sum up the key points of this article: The conservative thesis is based on four things -- Magic, cruelty, fatalism, greed. What we need is a new economic view for a new economic system that opposes these behaviors. In the article, “Diverse Economy is next after Capitalism and Communism” by this author in Pravda, a thesis was put forward on a new system of business and finance. A Diverse Economy would oppose the behaviors of magic, cruelty, fatalism and greed.

Opposed to “magic” would be an economics of rationality. We need to manage ourselves and not let spontaneous behaviors result in disaster. Self management would begin in the firm itself. Here we would catch the problem before it spreads. Industrial leagues would strictly apply ethical and transparent reporting guidelines.

Opposed to cruelty would be an economics of compassion and support, those who are victims should be helped. The blame should be put precisely on those who caused a problem. And we can design fiscal policies that support ordinary people and not favor big banks and corporations.

Opposed to fatalism should be an economics of human intervention -- intervening in the early stages of a problem, not letting things lag. This recession didn’t have to be. There are natural ups and downs in economic processes but they don’t have to result in crisis. With pubic business information we can catch problems before they become catastrophes. Capitalism hides information; ignorance is the general state of capitalism. Further, in capitalism there are no social forces that can act against irresponsible corporations. In a Diverse Economy, there are ‘Leagues’ for consumers, investors, communities, employees and more. Leagues would create a check and balance system making an economy a truly social partnership.

Opposed to greed would be an economics of human values and all key values in a culture. Money wouldn’t be the sole economic driver, profit wouldn’t be the only goal, greed wouldn’t even be considered as a value. In a Diverse Economy, there would be a collection of performance and metric targets that would represent a good list of important social values and good business values too.

Cage Innoye is an American writer. You can contact him at his blog, or at his email address. He is working on his upcoming book, “The Axxiad”.