Gold can be available through vending machines in Germany now

A vending machine selling tiny gold bars was launched at the main railway station in Germany’s Frankfurt-am-Main. The ATM machine, the size of a phone-booth and shaped as a gold bar, was installed in the financial metropolis of the European Union, Itar-Tass news agency reports. 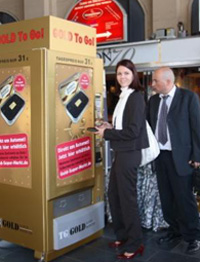 Gold can be available through vending machines in Germany now

The new service appeared because of the aspiration of the Germans to rescue their savings during the crisis converting the funds on their bank accounts to gold bars.

About 59 tons of gold bars and coins were sold to natural persons during the first quarter of the current year in Germany. The gold sales exceeded the same-period level of the previous year four times.

The prices on gold bars available through the ATM change several times a day according to market fluctuations of gold prices. One gram of gold is currently priced at 31 EUR. The ATM accepts credit cards and cash. Each gold bar comes with the certificate of authenticity.

The Germans hold the absolute leadership when it comes to purchasing gold. For comparison, the French bought only 1.1 tons of gold from January to March.

About 500 gold-dispensing ATMs will be installed in Frankfurt-am-Main and other large German cities in the foreseeable future.