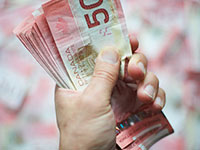 The IMF Country Report for Canada published Friday offers some unique perspectives on the reasons for the stability of Canada’s financial system since the credit crunch began. There have no been no failures of financial institutions, no large scale bailout of banks and the financial system did not undergo severe systemic pressures like it did in the U.S. and UK. Let's review some of the key points from this report.

1. Sound Supervision and Regulation: Regulators follow some of the best practices with respect to supervision of institutions including the new Basel principles for banking supervision. As a result writedowns by Canadian banks have been much smaller when compared to major-peer countries as shown in the chart below.

2. Strict Capital Requirements: Canadian banks’ Tier 1 Capital Ratio exceeds 7% which is higher than the 4% that required by the Basel Accord.

3. Leverage ratio: This is limited to just 5% of total capital or up to 20% maximum. U.S. banks on the other hand are allowed up to 33% based on their strength and sophistication.

5. Conservative Residential Mortgage Markets: In the US, 25% of all mortgages are non-prime and 60% of mortgages are securitized. In Canada these numbers are just 5% and 25% respectively. In addition most of the mortgages in Canada have Loan-To-Value ratios of below 80%.

6. Periodic Regulatory Reviews: Since the financial sector is ever-changing with innovations and globalization, the federal authorities in Canada review the financial regulations every 5 years. It is not clear if a similar process exists in the U.S.

7. Cooperation among regulatory agencies: Officials of the various government agencies such as the Office of the Superintendent of Financial Institutions, Finance Canada, Bank of Canada, Canada Deposit Insurance Corporation, and the Financial Consumer Agency of Canada meet regularly as part of the Financial Institutions Supervisory Committee to discuss and exchange regulatory information. In the U.S., agencies such as the Office of Thrift Supervision, FDIC, Federal Reserve, etc. usually operate independently of one another. Inter-agency cooperation is non-existent for the most part.

8. Proactive response to financial strains: Federal authorities are proactive when it comes to dealing with financial strains to the system. The 2009 budget contains many provisions to support stability in the financial system.

As a result of the above reasons, all the top five Canadian banks have become strong and powerful among the banks in North America.

For example, the above table shows that Royal Bank of Canada had a market cap larger than Bank of America on April 1, 2009. And all five banks were well ahead of Citibank. Citibank used to have a market above $200B only a few years ago. Now if not for the government bailout, the bank would have failed. Some experts like Mark Patterson have said that many large U.S. financial giants are technically insolvent.

Overall despite being very close to the U.S. in terms of financial and economic linkages, Canadian banks have so far shown remarkable resilience during this crisis.