Law-enforcement authorities have arrested warehouses of one of the biggest foreign shock absorber producers – Kayaba Industry, because a Russian inventor who received a patent for an absorber construction claims a 30-million-dollar compensation. Lawyers suppose that the intellectual property right case may take several years at court. 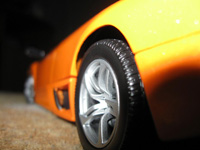 Russian scientist Oleg Tikhonenko invented an improved construction of shock absorbers in 1994. According to the law, he had to apply for a patent within six months, but he did it only in 2008. This fact lessens his chances for receiving a compensation.

However, he applied to law-enforcement authorities, and they purchased absorbers of the Kayaba Company for an investigation. Independent experts revealed that this company uses schemes patented by Tikhonenko indeed. In mid-April, its warehouse was arrested. Kayaba lodged a protest.

An official of the Russian Federal Service for Intellectual Property, Patents and Trademarks (Rospatent) told Gazeta.Ru that the law-enforcement authorities might “overdo” their work and close the foreign warehouses without serious reasons. She emphasized that Russia just begins to work on guarding intellectual property rights of its citizens. Scientists often register their inventions only inside the country and do not apply for international patents due to the lack of finance. In this case, foreign firms may legally use an invention outside the country. Of course, they do it, and an invention receives no demand in Russia . Therefore, Kayaba’s experts will have to prove that they had begun using Tikhonenko’s invention before he gained the international patent. Lawyer Galina Romanova presumes that his patent will be canceled.

Tikhonenko says that he supports Russian manufacturers that could use his work. But most of them do not know about his invention.