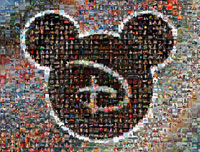 Barclays analyst Anthony DiClemente upgraded Disney to "Overweight" from "Underweight" and raised his price target for the stock to $32 from $17.

In a note to clients, DiClemente said he still has concerns about the decline of broadcast TV and DVD revenue, given the shift by many consumers to online video.

But he added that "Disney management has proven the ability to adapt its strategies," pointing to recent deals including its investment in the online video site Hulu.com.

Disney announced last week it will take an equity stake in the company, joining NBC Universal and News Corp. The agreement will put ABC television shows and older Disney films on the site, the AP reports.

The Walt Disney Company suffered the effects of the recession, particularly at its parks division and its local TV affiliates.

DVD sales took a hit from the pullback in consumer spending while the movie division struggled with a weak quarter and tough comparisons with last year.

Including restructuring charges and one-time items earnings per share came in at 33 percent, less than analysts expected. But when those restructuring and impairment charges are stripped out, EPS fell 26 percent to 43 cents, three cents higher than the Wall Street's consensus expectation.

CEO Bob Iger and CFO Tom Staggs wouldn't go too far to reassure investors with predictions about an economic recovery. But Iger did say that the company is "seeing some signs the downturn has stabilized" and that in terms of the advertising market, there are indicators that the pace of decline is stabilizing. Iger and team are optimistic about how the company is positioned when the economy does recover. And when it comes to sector challenges, like the shift of consumers to the web, Disney is tackling that issue as well. Iger says the company is organizing itself so it can be positioned to profit as people consume more content online.

The parks division has been working to mitigate the effects of the economic downturn with major promotions, which has helped keep attendance fairly steady. But while people clearly want to visit Disneyland and Disneyworld, they're spending much less for the experience. Revenues in this division were down 12 percent while operating income was down 50 percent, CNBC reports.

The company is taking different strategies for each of its TV networks, focusing on building portals around the Disney and ESPN brands, while ABC and ABC family content will live more outside their own sites. From Disney's perspective, people will pirate content online if they can't find it easily and legally on sites like Hulu and ABC.com, so why not make it available and make some money off it.