The recovery of US economy hidden behind a zipper

Many people prefer not to spend their money on new clothes. Purchasing new clothes is not considered essential these days, especially for those who have to spend several minutes or even hours thinking what they are going to wear today. However, the current state of affairs in the jeans-making industry shows that better times for fancy clothes are just around the corner. 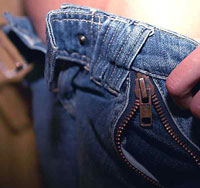 The recovery of US economy hidden behind a zipper

Jeans sales gained 2.3 percent in the United States during the three months of this year – from December 2008 to February 2009. The sales of other kinds of clothes dropped by 6.3 percent, NPD Group said. Expensive stores suffer losses because of the slumping consumer spending. Denim clothes of premium models priced at over $100 make the ultimate leader, Marshal Cohen of the NPD said.

The premium segment, which embraces about 2.3 percent of the entire 12-billion-dollar denim market, showed a 0.4-percent sales growth within the above-mentioned three months. The growth made up 17 percent as of the end of 2008, which means that the 200-billion-dollar clothing industry may finally see the light at the end of the tunnel soon. The dynamics of such categories as jeans, underwear and shoes has always been the leading market indicator during the last five recessions. The consumers, who delay their acquisitions for long, believe that these garments need to be renewed first, BFM portal said.

The growth of denim sales usually means that consumers will soon be ready to start making purchases again. When the market recovers, the jeans market will take the lead in this trend.

The situation is different as far as the Russian market of denim clothing is concerned. The volume of the Russian clothing market made up $40 billion in 2008. The share of denim clothes was evaluated at only $3-4 billion. Up to 90 percent of denim available in Russia is considered counterfeit, experts say.