Americans who even bother to examine the vanishing Twenty Dollar bills in their wallets are usually pretty clueless about the crusty old guy looking back at them. Few bother to wonder who he was or what he did to get his mug shot there. ‘Some President from back in the olden day’ is usually about the extent of the musing, if any. These days, most Americans are too busy putting food on the table and trying to hold onto their homes to care about such things. Folks are too worried about money to worry much about the money itself, if you take the meaning. The guy on the Twenty is just way below the radar screen right now. But truth be told, his name was Andrew Jackson and he was the 7th President of the United States . He certainly didn’t get his picture on the currency because he was a nice guy. 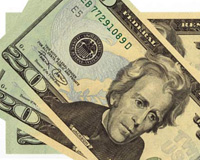 In real life, he was every bit as crusty and cantankerous as his portrait suggests. If anything, he was worse, maybe even a little psychopathic. He killed a lot of Indians, especially in Florida and stole their land. But he also defeated the British in the famous battle of New Orleans . That won him the White House, the first General since Washington to make it there. Once there, he completely redefined the office. U nlike previous Presidents, Jackson didn’t bother cajoling Congress over policy-making but used the veto pen and his party leadership to rule. His enemies called him King Andrew and whined about a creeping military dictatorship (especially when he threatened to hang them as traitors). But in reality, he owed his power to popularity with American voters (he was affectionately known as Old Hickory). He’s credited with being a founder of the Democratic Party and of real democracy in America.

As President, Jackson is probably best know for destroying the Bank of the United States, a private company in name, but in reality a Government-sponsored monopoly. When Jackson appeared hostile toward it, the Bank threw all its power against him. “That Bank” Jackson fumed to his favorite laky (and successor) Martin Van Buren, "is trying to kill me, but I will kill it!" Jackson, in vetoing the Bank’s re-charter bill, claimed it conferred undue economic privilege on shareholders and accused the Executives of meddling in politics. Old Hickory ’s veto message waxed poetic.

“In the full enjoyment of the gifts of Heaven and the fruits of superior industry, economy, and virtue, every man is equally entitled to protection by law; but when the laws undertake to add to these natural and just advantages artificial distinctions, to grant titles, gratuities, and exclusive privileges, to make the rich richer and the potent more powerful, the humble members of society-the farmers, mechanics, and laborers-who have neither the time nor the means of securing like favors to themselves, have a right to complain of the injustice of their Government.”

It might apply today, but Jackson was writing in the summer of 1832 and the issue before the Country was far more important than simply renewing a Bank Charter or granting special favors to a few rich men. The issue was power. Did the Bank control the Government or did the Government control the Bank? In the end, Congress didn’t have the votes required to override the veto and Jackson won out. The President, not the Bank carried the day. A lot of people still don’t agree, but maybe, on the whole, and in some ironic way, Old Hickory deserves his face on the currency.

Now fast-forward about a hundred seventy five years later to another American Bank called Goldman Sachs, or simply Goldman for short. Founded back in 1869 by a Jewish immigrant, the company went public only about 10 years ago. It trades on the New York Stock Exchange under the symbol GS. As of this writing, it has almost a trillion dollars in cash and no less than three former Treasury Secretaries were once Goldman CEOs, including Robert Rubin and our old friend Henry Paulson.

It was the mercurial Paulson, if you recall, who in the final days of the Bush Administration, presided over the decision to allow Lehman Brothers, a Goldman competitor, to go belly up, and to bail out American International Group (AIG). Starting with $85 billion from the Federal Reserve, taxpayers have pumped over $170 billion into the giant insurance company. The bailout was crucial to Goldman since it permitted AIG to pay off over $12 billion in debt that it owed to the Bank. But the Government’s “gifts” didn’t’ stop there. As the Bush Administration left office, Secretary Paulson approved another $10 billion capital injection into Goldman from the U.S. Treasury's Troubled Asset Relief Program (TARP). Just last Monday, scarcely 90 days later, David Viniar, the Chief Financial Officer of Goldman, announced that the company would like to return all the TARP money. Since it earned profits of nearly $2 billion in the first quarter of 2009 alone, it turns out that the company didn’t really need the money after all. And in that event, Goldman simply couldn’t live with the strings that came attached to it, especially those nasty compensation restrictions. And Goldman Executives imagine even worse limitations to come, as rising public outcry forces Obama to imposed even tougher rules limiting pay and bonuses at companies receiving taxpayer dollars. That must have especially rankled since Goldman was the second largest donor to the Obama campaign. In fact, Obama recently suggested that Executive compensation at TARP recipients might soon be limited to a paltry $500,000 a year, adding that lower compensation is a crucial element of restoring taxpayer trust.

Unfortunately for Goldman Executives (who earn logs more than half a million a year) the American Recovery and Reinvestment Act, which was approved in February, blocks recipients of bailout money from simply paying it back as they please. The law wisely requires the Treasury to negotiate with regulators before it approves any repayment. Experts worried that untimely repayments could jeopardize the entire financial system by spooking investors at other firms, such as Bank of America and Citigroup, which may be unable to repay the funds. Worse still, repayment could be seen as a negatively photo tactic move, fresh evidence that Wall Street still prefers the shadows, presaging a return of bad habits. That would undermine, perhaps fatally, any renewal of investor confidence, the real rate-limiting factor for any meaningful recovery.

Goldman is easily the most powerful Bank on Wall Street with tentacles reaching deeply into the highest corridors of Washington’s halls of power. What will President Obama do? Goldman’s repayment of TARP money now risks not just recovery, but the Government’s ability to regulate the economy. Goldman Executives, both publically and privately, threaten that if they don’t get their way, financial things may go badly and they’ll be very sure that come November, voters know whom to blame. As in 1832, it’s really not about the $10 billion. It’s about power, ingratitude and insatiable greed. The stakes are n othing less than the fate of democracy. Now where’s a crusty old psychopathic General when you need one?