Shares in General Motors Corp slumped more than 17 percent in Frankfurt on Tuesday amid growing concern the automaker might file for bankruptcy. 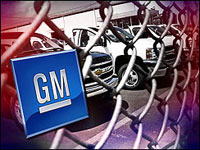 GM shares fell up to 17.5 percent in Frankfurt floor trade and were down 14.3 percent at 1.32 euros at 0708 GMT after falling about 16 percent in U.S. trade on Monday, Reuters reports.

The New York Times reported late on Sunday that the U.S. Treasury Department was directing GM to lay the groundwork for a bankruptcy filing should it fail to reach give-back deals with stakeholders by the deadline set by the Obama administration two weeks ago.

GM has repeatedly stated that it is looking to survive the current downturn in the auto industry outside of the courtrooms.

The preparations are aimed at assuring a GM bankruptcy filing is ready if the company fails to reach a deal with bondholders to exchange roughly $28 billion in debt into equity in GM and to get needed concessions from the United Automobile Workers union.

However, the bankruptcy plan could hit a snag as key members of an ad hoc committee representing the automaker’s bondholders are gearing up for a fight, The Wall Street Journal said in a separate report, citing people familiar with the strategy.

One of the most recent proposals on the negotiating table involved the bondholders getting a 90pc equity stake in what becomes of GM, but that seems unlikely. Although GM continues to work to avoid a Chapter 11 bankruptcy filing, advisers are known to be looking into the possibility of a filing which would involve splitting the company into two parts – essentially a good company, and a bad one.

One of the key questions surrounding such a structure is how much the good company would be worth, and how much debt it might be able to service.

The auto task force resumed meetings with GM officials, led by recently elevated chief executive Fritz Henderson, last week. Mr Henderson wants a solution that avoids bankruptcy and is in contact with all parties, including the government, the United Auto Workers union and bondholders.

As part of those talks, further cost-cutting measures are understood to have been raised, on top of the significant job cuts and plant closures already identified, telegraph.co.uk reports.

Meanwhile, in a further knock to consumer confidence in the manufacturer, GM recalled almost 1.5m Buick, Chevrolet, Oldsmobile and Pontiac cars due to a potential fire risk from faulty engines.