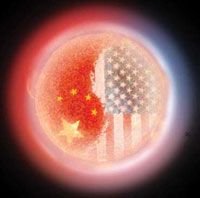 American power and influence in the world are as much a function of its financial health as its military prowess. But in just over a year, Wall Street’s venerable banking houses have been either gobbled up by rivals, succumbed to bankruptcy or refashioned as ‘holding companies.’

The ‘systemic shocks’ that continue to surprise us all on a daily basis are forcing the authorities to spend trillions of dollars in order to avert a complete meltdown. It seems every other week Treasury-man Geithner and Congress together invoke emergency powers that resemble wartime measures. With the Fed’s printing-press running day and night and knee-jerk legislation coming out of Congress, doubts about America‘s safe-haven status abound. Many commentators have compared America with Chavez’s Venezuela; talking-heads at CNBC call Obama and his ilk hedge fund operators - ‘The US hedge fund of America.’

Naturally the world is asking ‘why should we take seriously the American model of ‘free-enterprise’ as the debacle worsens?’ This crisis, it seems, is to America what ‘imperial overstretch’ was to Great Britain: a slow-motion unwind of international power and credibility - in short, the erosion of U.S. supremacy around the world and the ushering in of a ‘post-American system.’

The dissolution of the Soviet Union two decades ago greatly inspired America’s confidence; however, the recent credit crisis has seemingly abated America’s ‘unipolar moment’ and engendered much cynicism about capitalism’s underpinnings, especially the Anglo-American variant. It was just a few administrations ago that a weird ideological battle got underway to see who could be more influential. The infamous neocons agitated for the rest of the world to refashion themselves squarely in the American image (embracing free-markets and democracy or else!) while the complacent economic liberals - hinged to Adam Smith’s invisible hand - pushed the rest of the world to clutch the ‘Washington Consensus’ or face competitive extinction. The former lashed-out against everything from Islam to Environmentalism while the latter systematically ridiculed ‘Asian-cronyism’, to which they attributed the violent dislocations that swept through East Asian economies beginning in 1997.

The brazen neocons were swiftly refuted in the wake of the Iraq invasion, where American soldiers were greeted not with flowers and candy but rather with suicide bombers and sectarian violence. More recently, the economic liberals (Obama’s technocrats) are suffering a credibility crisis of their own as they are forced to nationalize all manner of institutions - from monolithic banks to global insurance firms. It seems the only thing agreeable at this moment is that Wall Street is ‘corrupt, excessive and responsible for the current debacle.’ Famous FX speculator, George Soros (whose teachers at the London School of Economics in the late 40’s were Karl Popper and F.A. Hayek!) argues that “market fundamentalism” is to blame and that the US-led free-enterprise system is anything but ‘self-equilibrating and self-regulating.’

The debate about ‘what is the proper economic system’ going forward is in full rage; but what are the implications of the credit crisis and the changing structure of international relations with America as the ‘hegemon’? To answer that, further exploration of the nature of the current financial crisis is required, and with a particular emphasis on China.

Numerous pundits have recognized that the economic ascendance of China is the paramount challenge to the international architecture. Flowing from this point of view, American authorities deem the China-US relationship as the most critical. Statistics taken from the last 10 years illustrate the two countries’ symbiosis: the two nations account for 25 percent of the world’s population, 33 percent of global GDP, 13 percent of the earth’s land mass, 55 percent of the world’s carbon emissions, and over half of global growth in the past 7 years.