Energy Intelligence Group published the list of world’s 50 largest oil companies. The companies of such little-known countries as Kazakhstan and Uzbekistan were included in the top 50 for the first time ever. Russian oil giants were not listed in the top ten. 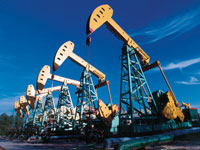 The list was based on six factors, which particularly include the financial results of a company, production volumes, oil reserves, sales volumes, etc. The rating of 2009 is based on the statistics of 2007: the data required for such lists comes late and needs to be revised.

Twenty-seven of 50 largest oil companies in the world are state-run corporations.