Russia's economy will contract by more than 2 percent this year under the weight of the financial crisis and lower commodity prices, the country's deputy economic development minister said Tuesday, according to the state-owned RIA Novosti news agency. 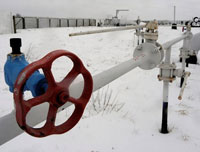 "The GDP forecast has been downgraded to minus 2.2 percent," Andrei Klepach was quoted saying by the agency.

Klepach's estimate was the first official announcement of a sharp fall in the Russian economic growth, with the government previously predicting only a 0.2 percent contraction for 2009.

The minister said the forecast had been revised due to increasing investment outflows, which he estimated at 14 percent this year.

Russia's stock markets reacted with steep drops in late trading. Both the RTS, Russia's benchmark index, and the larger MICEX exchange shed 9.4 percent by the close of the day. The national currency fell 2 percent against a dollar-euro basket.

But even after the latest forecast revisions, the government is still more optimistic than most analysts about the year ahead.

Sergey Guriev, dean of the Moscow-based New Economic School, said Tuesday he expects the economy to contract by 5 percent this year — due to a drop in oil prices and de-leveraging.

Some others said the fall could be as deep as 15 percent.

The Russian economy is facing its bleakest economic outlook since the 1998 financial crisis as it struggles with the global credit crunch and plunging commodity prices, the AP reports.

Klepach forecast Tuesday that industrial output would decline 7.4 percent this year, as he expects the sector's slide to ease in February.

Other high-ranking government officials said last week that Russia is facing a budget deficit of 8 percent this year and is likely to slash its budget spending to stave off a sharp fiscal deficit.