European banks are too big to rescue 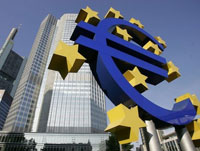 European banks are too big to rescue

Those worries are still with us three months later. And with good reason as many countries in Eastern Europe are in or headed for Depression, Latvia being the most obvious example.

Here is the crux of the matter: there are a number of banks which are very large in relation to the size of their domestic economies. In the past, that has meant that they are too big to fail. Citigroup is a prime example of banks that fall into this category.

But, there are also a number of banks with an asset base that is disproportionately large mainly due to many overseas assets. Royal Bank of Scotland is a prime example. What this means is that the governments where these banks are domiciled cannot make credible guarantees regarding the institutions in question.

If we suffer a crisis of confidence and these banks come under attack, they become literally too big to rescue.

To give a few numbers, here are some examples in no particular order.

This list is far from comprehensive -- it does not include Sweden, Ireland or Austria and it does not include other non-bank financial companies like Hypo Real Estate or Allianz. Germany is the best of the bunch, largely due to the size of its economy. But if you add in Commerzbank (incl. Dresdner), Postbank, WestLB, and the Landesbanks of Baden Wuerttemburg and Bavaria, you have a problem there too. And many of these German institutions are already having problems.

The data all comes from Data Monitor and the IMF.

The long and short of it is: many countries in Western Europe have weak financial sectors with high systemic risk. The concern here deals mostly with the theory of reflexivity, popularized in finance by George Soros. Wikipedia has a decent definition:

In sociology, reflexivity is an act of self-reference where examination or action 'bends back on', refers to, and affects the entity instigating the action or examination. In brief, reflexivity refers to circular relationships between cause and effect. A reflexive relationship is bidirectional; with both the cause and the effect affecting one another in a situation that renders both functions causes and effects. Reflexivity is related to the concept of feedback and positive feedback in particular.

An example is the interaction between beliefs and observations in a marketplace: if traders believe that prices will fall, they will sell - thus driving down prices, whereas if they believe prices will rise, they will buy - thereby driving prices up.

Clich here to read the full text of the article.